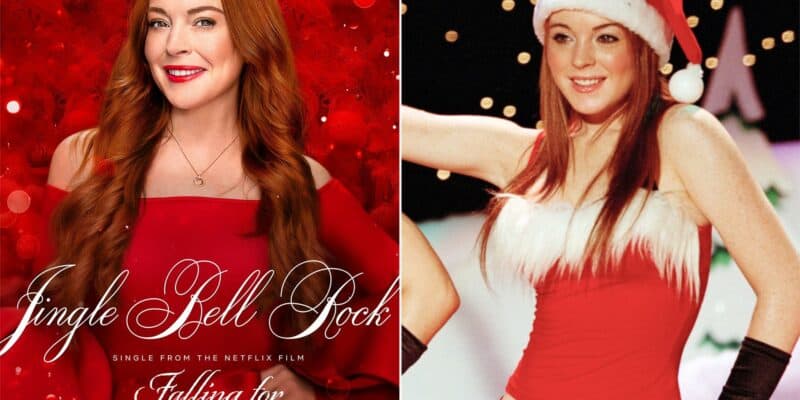 Lindsay Lohan (Freaky Friday (2003)) has been gearing up for her new movie Falling for Christmas (2022). In doing so, she brought back an old classic from 18 years ago.

Lohan just released a cover of Jingle Bell Rock and gave many people an early gift of nostalgia this year for Christmas.

Back in 2004, nearly 20 years ago, Lohan was in another movie where she sang this same song for a high school talent show.

When the song malfunctioned, Lohan’s character led the entire auditorium in singing the song so that her and her ‘friends’ could finish their choreography.

That is so fetch.

Here we are now, and Jingle Bell Rock is part of the soundtrack for Lohan’s new Netflix holiday rom com Falling for Christmas.

The movie follows Lindsay as an engaged and snobbish “hotel princess.” While on a trip with her fiancé, she suffers total amnesia from a skiing accident. She is taken in by the handsome lodge owner, played by Chord Overstreet (Glee) and cared for just days before Christmas.

In an interview with People Magazine on November 2nd, Lindsay Lohan shared that she had cried when the movie wrapped production.

“I hadn’t been on a romantic comedy movie set in so long—it was almost like a rebirth,” she said.

Lindsay is making her lead-actress comeback with this Christmas movie. Earlier this year, in March, she signed a deal with Netflix that will give us two more movies with Lohan as our leading lady. The next will be another rom com in 2023 called Irish Wish.

Falling for Christmas is set to stream on Netflix on November 10th.

Are you excited for this new Christmas Rom Com?!