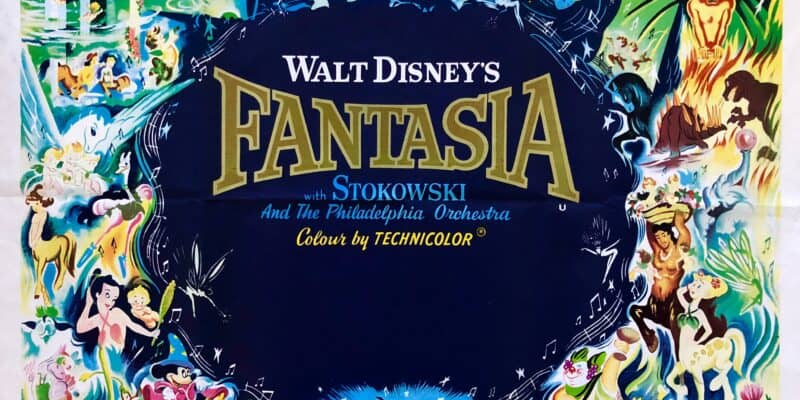 Fantasia was first released as a theatrical roadshow that was held in 13 cities across the U.S. between 1940 and 1941; the first began at the Broadway Theatre in New York City on November 13, 1940.

The movie consisted of eight animated segments set to pieces of classical music conducted by Leopold Stokowski, seven of which are performed by the Philadelphia Orchestra.

Toccata and Fugue in D Minor by Johann Sebastian Bach

Live-action shots of the orchestra illuminated in blue and gold, backed by superimposed shadows, fade into abstract patterns. Animated lines, shapes, and cloud formations reflect the sound and rhythms of the music.

This ballet suite underscore scenes depicts the changing of the seasons from summer to autumn to winter. A variety of dances are presented with fairies, fish, flowers, mushrooms, and leaves, including “Dance of the Sugar Plum Fairy”, “Chinese Dance”, “Arabian Dance”, “Russian Dance”, “Dance of the Flutes” and “Waltz of the Flowers”.

The Sorcerer’s Apprentice by Paul Dukas

Based on Goethe’s 1797 poem “Der Zauberlehrling”. Mickey Mouse, the young apprentice of the sorcerer Yen Sid, attempts some of his master’s magic tricks but does not know how to control them.

Rite of Spring by Igor Stravinsky

A visual history of the Earth’s beginnings is depicted to selected sections of the ballet score. The sequence progresses from the planet’s formation to the first living creatures, followed by the reign and extinction of the dinosaurs.

A mythical Greco-Roman world of colorful centaurs, cupids, fawns and other figures from classical mythology is portrayed to Beethoven’s music. A gathering for a festival to honor Bacchus, the god of wine, is interrupted by Zeus, who creates a storm.

Dance of the Hours by Amilcare Ponchielli

A comic ballet in four sections: Madame Upanova and her ostriches (Morning); Hyacinth Hippo and her servants (Afternoon); Elephanchine and her bubble-blowing elephant troupe (Evening); and Ben Ali Gator and his troop of alligators (Night). The finale finds all of the characters dancing together until their palace collapses.

At midnight the devil Chernabog awakes and summons evil spirits and restless souls from their graves to Bald Mountain. The spirits dance and fly through the air until driven back by the sound of an Angelus bell as night fades into dawn. According to Walt Disney, Chernabog is meant to represent the devil himself.

Which Fantasia segment is your favorite?