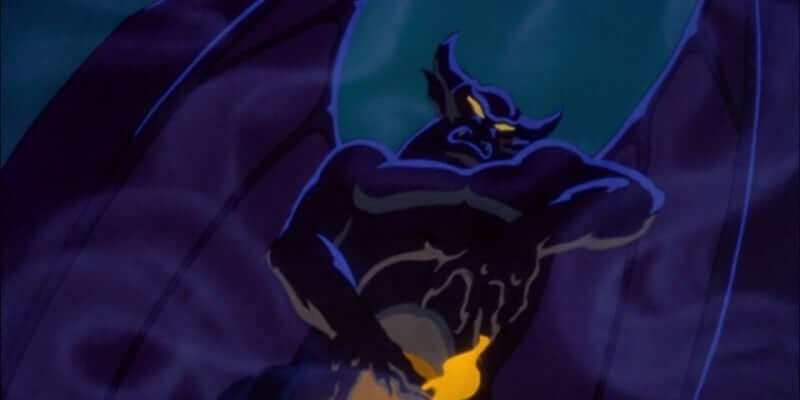 The demonic Chernabog is based on Slavic tales of the God of the Night which makes an appearance on Walpurgis Night.  Known as Walpurgisnacht in Germany, this witch’s night takes place at the end of April, on the feast for Saint Walpurga (May Day).  During the ceremony witches meet at Brocken Mountain (Germany) dancing and drinking with the devil while awaiting  the beginning of spring and appearance of the Brocken Specte.

The Brocken Spectre is a magnified shadow of an observer, typically surrounded by rainbow-like bands, thrown onto a bank of cloud in high mountain areas when the sun is low. The phenomenon was first reported on the Brocken.   –Oxtord Prase & Fable (according to Wikipedia)

Walt Disney’s version of this God of the Night/Brocken Spectre made his first appearance as in the Night on Bald Mountain segment of groundbreaking Fantasia film in 1940 (Fantasia was the first stereo cartoon movie).  In Fantasia, Chernabog is the gigantic winged demon; literally unfolding from the mountain’s top as he unfurls his wings.  This dark segment is scored with the classical Mussorgsky piece entitled Night on Bald Mountain. At the peak of Bald Mountain, the giant night god would gather the forces of evil (witches, banshees, ghosts and demons) and then hurl them back to hell. The personification of Evil, Chernabog has returned to make appearances on Disney’s House of Mouse, the Wonderful World of Disney and Once Upon a Time.  The Night God was also featured as a boss villain in Kingdom Hearts and appeared in Epic Mickey 2: the Power of Two.  In Disney theme parks, this black winged demon makes appearances in the various parades as well as during Fantasmic and World of Color shows.  Chernabog is also featured in a variety of theme-park related merchandise (including figurines, tee-shirts, and art work) In June of 2015, Entertainment Weekly announced that the Walt Disney Company will be turning the Fantasia Night on Bald Mountain featurette into a full length feature film.  The live action adventure is to be written and produced by Mat Sazama and Burk Sharpless (Dracula Untold, Gods of Egypt). Which Disney Villain do you identify with?  Proclaim your favorite in the comments below.