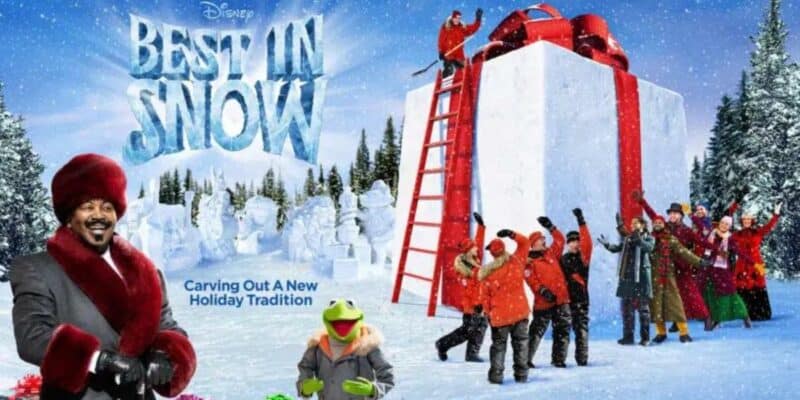 Disney is starting the holiday season off with a bit of competition. Best in Snow premieres on Disney+ on November 18th.

It was first announced at the D23 Expo 2022. This unscripted holiday special will be hosted by actor and singer, Titus Burgess.

Best in Snow will follow five teams from around the world as they congregate in a magically snowy village called Snowdome. There they will compete for the title of ‘Best in Snow’.

The carvers must work together to transform, 10-foot, 20-ton blocks of snow in works of Disney masterpieces.

It wouldn’t be a Disney+ special without a little magic.

These teams of creators will be taking their inspiration from Marvel, Pixar, Walt Disney Studios, The Muppet Studios, and Walt Disney Animation!

Fans will be excited to see some of their favorite characters and Disney scenes incorporated into these snow creations.

A few celebrities stop by, including Kermit the Frog, and offer a helping hand.

In a new trailer for the series, we can see characters and scenes from the movies The Lion King, Coco, and Moana. These things are brought to life and made entirely of snow!

Throughout the series, there will also be performances done by different artists including Burgess himself, Kermit the Frog, and DCappella.

Those are sure to get you into the Christmas spirit.

The trailer also shares that this competition will last for four days.

Some of these masterpieces are going to be so intricate, that that means a few of the teams will be working late and carving literally all night.

Premiering November 18, it’s the perfect way to get into the winter spirit! Don’t miss Christmas as it gets competitive in the new Disney+ special Best in Snow!

Are you ready for some Best in Snow?