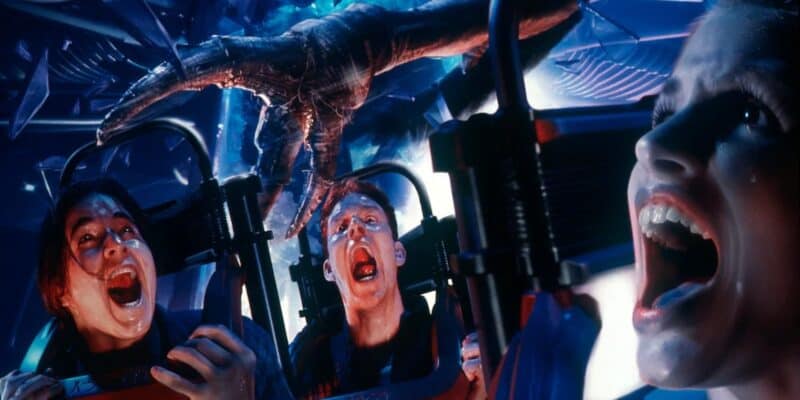 Before Stitch took over its space for his own attraction, later Meet and Greet, Tomorrowland was home to a frightening, freaky, and fully-immersive experience that put guests in closed quarters with a hungry predatory Alien. It was an attraction so scary that Disney had no choice but to shut it down.

ExtraTERRORestrial: Alien Encounter, was an attraction in Walt Disney World’s Tomorrowland from 1994 to 2003, and it was truly the stuff of nightmares. Disney has always had a bit of a dark side that they’ve shown on rare occasions, but this attraction truly went above and beyond the call of duty. For a more thorough description of the former attraction, Defunctland gives an in-depth history on its conception and years of operation, but the ride consisted of guests encountering a deadly alien after a transporter malfunction accidentally teleports the creature in the middle of the room. Though ultimately deemed too scary for Disney, with reports of guests screaming loud enough to drown out the attraction’s audio, it did present an interesting concept on then-CEO Michael Eisner’s part. It was an attraction with an adult audience in mind.

Related: The Disney World Ride So Scary It Had to Shut Down Forever

While Eisner was the head of the Walt Disney Company, long before Bob Chapek’s regime, he wanted to create new rides, attractions, and experiences that appealed to older audiences, namely kids and teenagers. This plan of action resulted in a partnership with George Lucas who developed both Star Tours and the Indiana Jones Stunt Spectacular but also sparked Eisner to consider an attraction inspired by Ridley Scott’s Alien franchise. The Xenomorph-inspired attraction supposedly disgusted the Imagineers and Eisner was told to reel it in. However, that doesn’t mean he didn’t have the right idea.

Eisner was a CEO, a corporate business man, and a suit for the Walt Disney Company, but he understood how to play to an audience and invest in what they wanted. They didn’t necessarily want a killer alien running loose in a Tomorrowland attraction, but he understood that Disney’s biggest supporters weren’t just the kids that consumed their cartoons and other animated features. Alien Encounter was designed with a different audience in mind, and it definitely had its own niche fandom who miss the sci-fi horror show even decades after its closure. Maybe if the Parks took a few more notes from Eisner’s perspective, the “Disney Adults” might see a drastic increase in material and attractions made just for them.

Did you survive Alien Encounter? Tell us in the comments below!