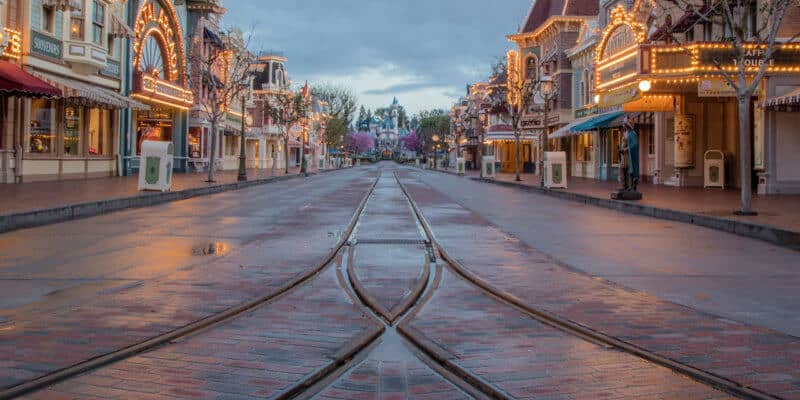 Well, in 1955, that is exactly what you saw. Disney had a shop called The Wonderful Wizard of Bras.

Women, can you imagine going to a Disney Park to purchase your lingerie?

The storefront is still there today. You walk up three little steps, and there is a nice little porch area you can sit on.

In 1955, however, you walked through the door and into the Victorian splendor of the Intimate Apparel Shop, presented by the Hollywood-Maxwell Brassiere Co. of Los Angeles.

Once inside, you got to learn the history of underwear.

“Don’t miss the authentic Singer Sewing Machine from around 1860—it’s a “most unusual and unique part of the display,” according to advanced publicity. And remember to look into all the 3-D boxes to see outer and intimate apparel of the past. As you slowly move your head, you’ll see the models’ turn-of-the-century attire disappear to reveal their corsets and pantaloons.”

Hollywood-Maxwell’s Intimate Apparel Shop is not just about the Victorian past. In fact, half the store is devoted to the latest bras and petticoats of 1955.

Sadly, in January of 1956, the shop closed, and the China Shop next door expanded.

The store had a few more iterations, but in 2009 closed entirely to guests and now serves merely as a beautiful and decorative storefront. If you look up, you’ll see a pretty sign in the upper-floor window for Roland F. Crump’s Palm Parlor.

Rolly is quoted saying, “My window is special to me, not only because it honors me, but because it’s hanging in a special place. The building it’s on is the only building on Main Street that has a porch. It was the oddest shop that was ever on Main Street,” he added, “which, I suppose, suits me pretty well, doesn’t it?”

This sign provides clues to some of Rolly’s many contributions to Disneyland, especially his work on the Museum of the Weird (never built), Walt Disney’s Enchanted Tiki Room, “it’s a small world”, and the Haunted Mansion.

This isn’t the only time Disney attempted to have a lingerie shop. 35 years after the original, a shop called Jessica’s open in December of 1990 on Pleasure Island at Walt Disney World.

However, three years after opening, they also closed their doors for good.

It’s been almost 30 years, should Disney try and open another lingerie store?