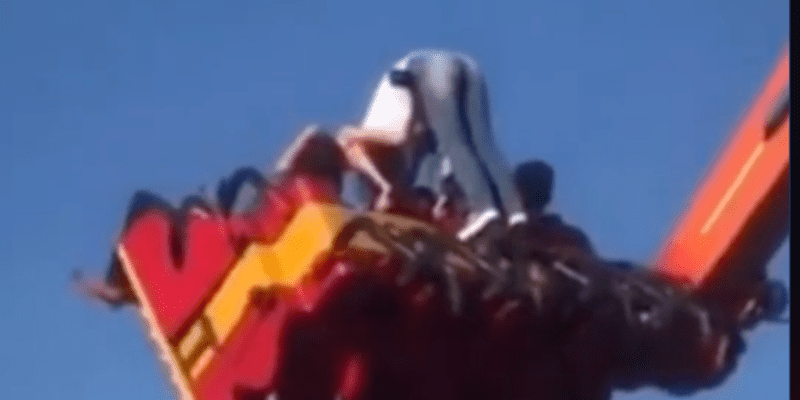 A shocking incident recently unfolded at an amusement park that saw a woman dangling from a popular attraction.

No matter what theme park you visit, whether it be a Disney Park at Walt Disney World Resort or Disneyland Resort, or if it is another popular destination like Universal Orlando Resort, Universal Studios Hollywood, Six Flags, Busch Gardens, SeaWorld, or others, every single one has rules and regulations to follow to keep you safe.

However, that does not mean that attractions can’t be subject to malfunctions, especially at carnivals and amusement parks that are temporarily set up, rather than permanently fixed.

This is exactly what happened recently as user @joeybrezinski captured the moment on TikTok.

BREAKING: Carnival rides around the world are breaking.

BREAKING: Carnival rides around the world are breaking.

As you can see in the video, the woman somehow slipped out of her seat and is dangerously hanging on. She is able to maintain a grip and the ride operator is able to bring the attraction down slowly. She has to flip her body at the end, and luckily, wasn’t seriously injured in the process.

It’s unclear what caused this malfunction to happen.

This isn’t the first incident to happen at an amusement park this year and, luckily, this incident did not end in tragedy. One of the most notorious incidents to occur happened this past spring at ICON Park in Orlando when 14-year-old Tyre Sampson was released from his seat while riding the Orlando FreeFall and tragically fell to his death. It’s been announced since then that the attraction will be demolished and Sampson’s family has filed a lawsuit against more than a dozen defendants claiming negligence.

Just recently, a toddler was struck by a train at the theme park Land of Make Believe in Hope Township, New Jersey, and was left in critical condition after the incident.