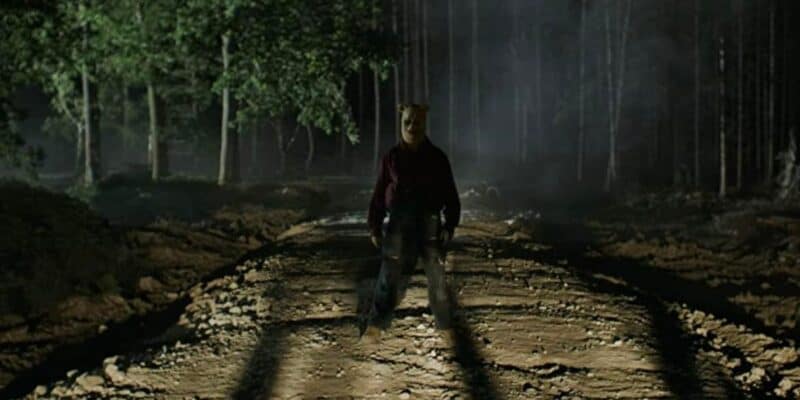 Winnie the Pooh: Blood and Honey is a new adaptation to an old classic.

Earlier this year, the original A.A Milne books became public domain, with Disney still owning the rights to the cartoon version. This means that filmmakers are now allowed to use the name and the story as long as it doesn’t include any elements of Disney’s version.

The horror movie starts off with Christopher Robin heading back to the 100 Acre Woods after he left for college. There he meets a bloodthirsty Pooh and Piglet waiting for him.

Early in the movie we see a sign that reads, “RIP Eeyore” suggesting that his ‘friends’ have either killed or eaten him. These beloved childhood characters have been abandoned by Christopher Robin; and have turned wild.

A little later in the movie, we see a group of five women spending a weekend in a holiday home. There they are greeted by Pooh and Piglet. This makes up for the majority of the rest of the movie.

Each of these women are slowly picked off by our once sweet and cuddly characters; but not before they receive a fair warning.

The trailer gives many hints of a classic horror film. It even ends on a cliff-hanger, with Winnie the Pooh and Piglet each pouring a jar- one with blood, and one with honey, into a vat together. I’m sure we’ll find out soon why.

The movie poster even boasts “This ain’t no bedtime story.”

A.A Milne’s classic, Winnie The Pooh was published back in 1926. Disney acquired the rights to the 100 Acre Wood and everyone in it in 1961. Now, according to Copyright Law, after 95 years, works of pseudonymous or corporate authorship become public domain.

That means, that as of January 1st, 2022, anyone can now write or create anything about Winnie the Pooh and Piglet. However, they still have to wait a few more years until they can get their hands on the rest of the gang.

What do you think? Are you gonna watch this new movie? Let us know!