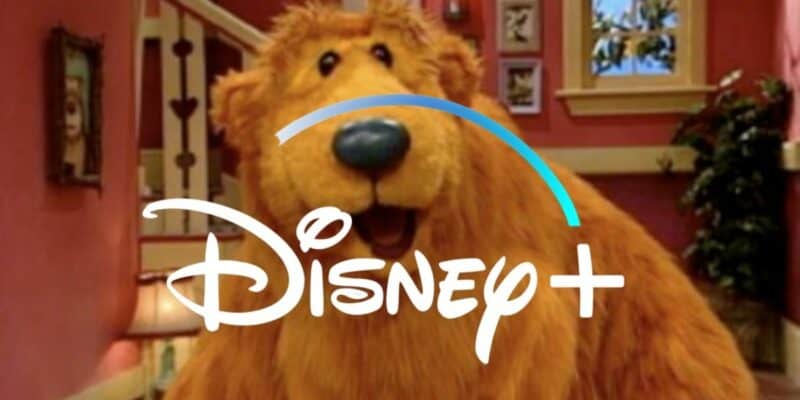 After a long absence away from the rest of the classic Disney shows, Bear in the Big Blue House finally hits Disney+ by popular demand.

Disney has always had a talent for children’s TV, and many of its current audience grew up watching Playhouse Disney early in the mornings. While Winnie the Pooh might be the company’s most popular big yellow bear, he wasn’t the only one to fit that description. Bear in the Big Blue House was a TV show brought to Disney by the Jim Henson Company that featured the titular Bear, Big Blue House, and a whole host of furry animal friends brought to life by the studio’s famous puppetry. Not only was this a popular show on the Disney Channel, but it had a whole swamp of popular merchandise, a live show at Disney’s MGM, and Bear himself even appeared on Hollywood Squares.

The show always began with Bear opening his front door and greeting his viewers with a big friendly sniff, normally detecting notes of breakfast and clean pajamas, before embarking on the episode’s theme of the day. While many visits to the Big Blue House often involved teaching kids the fundamentals of sharing and communication, some also included lessons about the water cycle, the sun, and different types of dancing. It was a perfectly balanced kids’ show that is still fondly remembered by a legion of dedicated fans who are more than ecstatic to see their old friend again.

Like so many Disney programs involving cuddly animal characters, it’s a cute and cozy affair that taught music, social development, and storytelling to its young audience. Now that it’s made a triumphant arrival on Disney+, a new generation of fans can get hugged and sniffed by Bear as they are warmly welcomed into his incredible house. Plus, older viewers who grew up starting their mornings with Bear will instantly fall into a sea of nostalgia when they see his big yellow face on their Disney+ menu screens. It’s great to see Bear return to our screens, but this could also be a preview of coming attractions set to return to Disney+.

The ’90s were arguably one of the best decades for the Walt Disney Company, both in and out of the studio and Parks, and Bear in the Big Blue House was only one of the revolutionary programs made by Disney at the time. With the arrival of Bear and his friends, Disney+ subscribers might also see a return of shows, including PB&J Otter also making its debut. Nostalgic children’s shows are certainly in a high demand for those millennials and ’90s kids with a subscription, and it seems Disney is hearing them out and reuniting them with their favorite long-lost friends.

Do you remember Bear and the Big Blue House? Tell us in the comments below!

Comments Off on After Long Absence, Beloved Show Hits Disney+ By Popular Demand