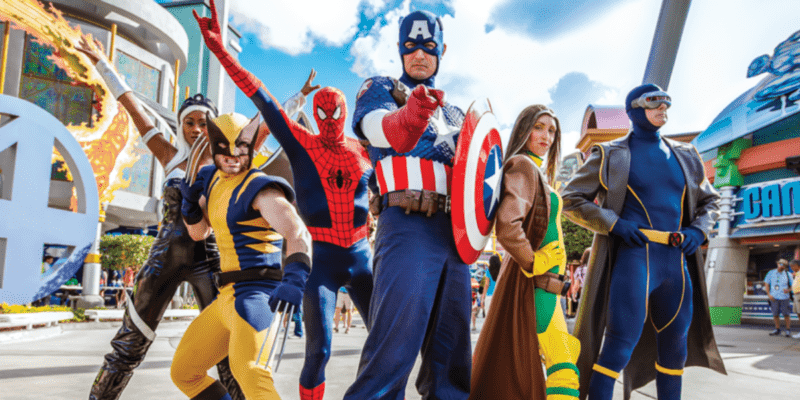 There have been a lot of rumors about the future of Universal Orlando Resort and Marvel Comics over the last several months.

With Universal’s contract with The Simpsons– which has been a staple at both Universal Studios Florida and Universal Studios Hollywood— reportedly coming to an end in 2028, there have been several reports that Walt Disney World Resort might finally have the leverage it needs to pluck Marvel from Universal Orlando and create an Avengers Campus at the Disney Parks in Orlando.

For those who are unaware, Universal Orlando Resort currently has a contract in place with Marvel Comics that gives them theme park rights for an indefinite period of time, essentially blocking Disney World from having the Avengers Campus and several other Marvel attractions in its Orlando theme parks.

Just recently, Universal’s official blog posted an interesting article that may have given some insight into what to expect in terms of its relationship with Marvel in the near future.

In the article, Universal details a complete guide to Marvel souvenirs that you can score while visiting Marvel Super Hero Island at Universal’s Islands of Adventure.

“Marvel Super Hero fans are a truly dedicated — and sometimes zealous — bunch. I can say that because I’m one of them. Certain spirited debates have raged on for decades… Who is stronger: Hulk or Thor? Is Reed Richards the most intelligent Super Hero? These are the kinds of questions that can draw out hours of conversation. But what is something that unites all Marvel devotees? We’re talking MERCH.”

The post details many different merchandise offerings, such as apparel, collectibles, and much more, that can be found at Universal Orlando Resort.

Though Universal only has attractions dedicated to a handful of superheroes and villains– with The Incredible Hulk Coaster, The Amazing Adventures of Spider-Man, Storm Force Accelatron, and Doctor Doom’s Fearfall, as well as a couple of restaurants, including one based on Captain America- the merchandise is much more focused on The Avengers and characters that have been made more popular by Marvel Studios– now owned by Disney– in the last decade of movies.

You can buy Thanos’ Infinity Gauntlet, a replica Captain America shield, an Iron Man mask, and several different items that are dedicated to the Avengers.

If this gives us any insight into what the future of Marvel and Universal looks like, it should show us that there is still a long way to go before an Avengers Campus winds up at Walt Disney World.

There have been rumors that Universal might buy Warner Bros. in the future, giving potential theme park access to DC Comics if it bought the rights out from Six Flags, but it’s clear that this is not on the immediate docket, at least not for a while.

So, what exactly does this mean for theme park fans who visit the two locations in Orlando often? You’ll continue to be able to pick up tons of great Marvel merchandise at both Universal Orlando and Walt Disney World, but if you’re wanting to ride an attraction based on any Marvel character, you’ll only be doing that at Universal’s Islands of Adventure. For an indefinite period of time.

What do you think of the Marvel-themed experiences in Universal Orlando? Let us know in the comments!