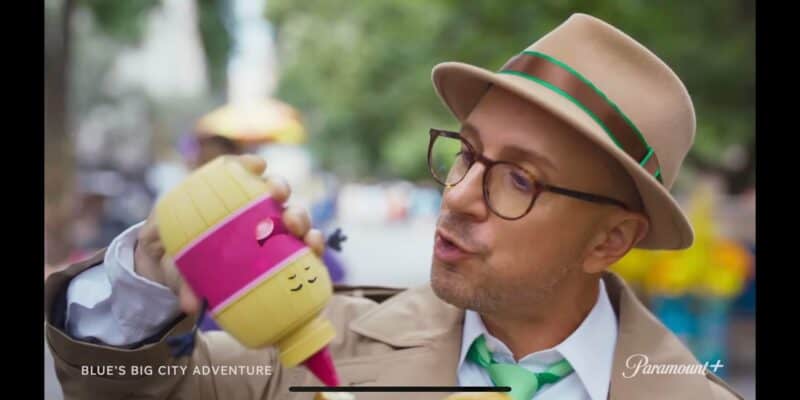 Steve Burns is back! His departure in 2002 left many people heartbroken. However, he is set to reprise his role in ‘Blues Big City Adventure.’

An official teaser trailer was dropped earlier this week.

Josh and Blue are in New York City, but Josh lost his handy dandy notebook. Mr. Salt, Slippery the Soap, and Tickety the Clock, say they ‘know a guy’ that can help. They show up outside a home in New York City and who’s there opening the door- Steve. He has on detective style clothes with a green tie that matches the shirt he used to wear on the show. He is also still carrying around his pen he used to solve clues with Blue. Together, along with Joe, they are able to track down Josh and give him his handy dandy notebook.

The decision to cast Steve Burns came a little over a year after he posted a video in honor of Blues Clues 25th anniversary explaining how he went away to college. That tweet went viral with over 1.5 million views and made us all remember just how much we miss Steve.

Nick Jr. wrote: “So about that time Steve went off to college…”

So about that time Steve went off to college… #BluesClues25 pic.twitter.com/O8NOM2eRjy

Now Steve is back on social media and has his own TikTok where he sits down and listens to the viewer, and it is the most ‘Steve’ thing ever. After the past couple of years, I am not sure who is more excited to see this new movie- the kids or the adults.

Get ready to help Steve and Joe find some clues, and get Josh and Blue to their Broadway audition. You will be able to stream “Blues Big City Adventure” on Paramount+ on November 18th.

Are you ready to look for some clues? Let us know in the comments.