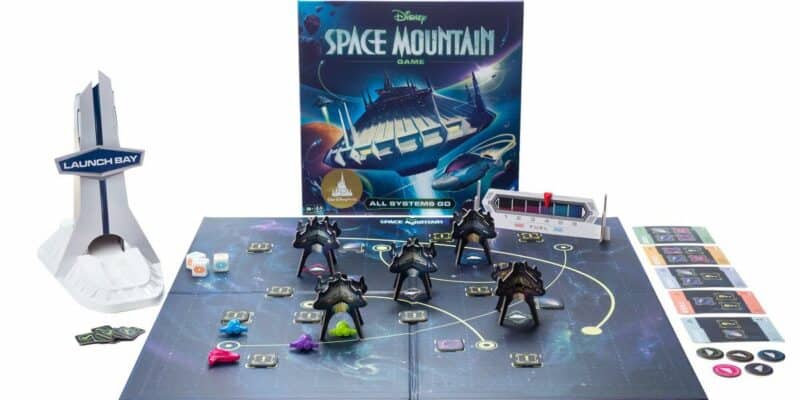 Now you don’t have to be at a Disney Park to enjoy Space Mountain.

Space Mountain is one of the most iconic structures and attractions at any given Disney Park. It ranks right up there with the castles.

The game makers over at Ravensburger have created a game based on this stellar ride- Space Mountain: All Systems Go. The game features a little something from each of the five Space Mountains from around the world.

Board games for Disney are nothing new. Many adaptations of classics like Sorry and Monopoly have been given a Disney twist. Disney also has tested the waters with other board games based on rides and movies: such as The Haunted Mansion and Big Thunder Mountain Railroad game.

At the recent D23 Expo, the company announced that it was creating a Disney trading card game that could potentially rival Magic the Gathering, called Disney Lorcana.

The creators of this game are Kevin Rodgers and Chris Leder. Included are standees of all five Space Mountain attractions from Disney Parks around the world. The game’s components also nod to fan-favorite parts of the ride. These include a dice tower, “Launch Bay”, and four colorful rockets.

In Space Mountain: All Systems Go, players will take on the role of pilots and explore the furthest reaches of space. To complete their mission and win the game, players must visit all five of the Starports. They must do so while avoiding asteroids, zipping over wormholes, performing daring twists around flying comets, unknown planets, and much more.

The game can be played by two to four players, ages eight and up. Game play takes between twenty to forty minutes. Space Mountain: All Systems Go is available for $29.99 at major retailers and local game stores.

Would you play this game? Let us know in the comments.

Comments Off on Space Mountain Board Game You Can Bring Home