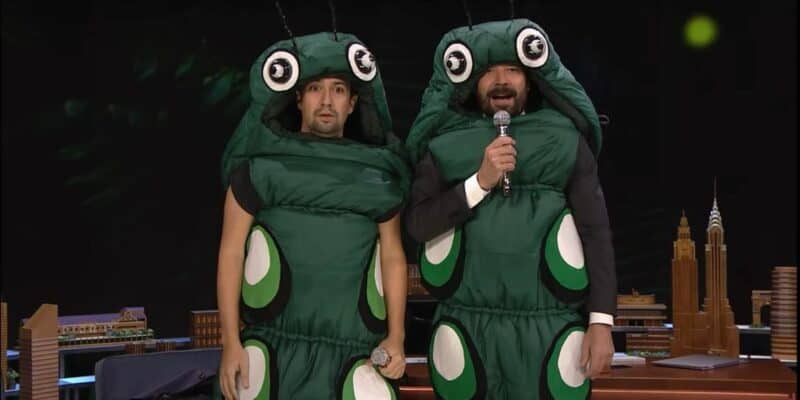 Lin-Manuel Miranda has been doing it all lately.

He is probably best known for creating the Broadway Musical Hamilton (2015) where he starred as Alexander Hamilton, and for creating the best original score for the Disney movie Encanto (2021).

His website boasts, “A Pulitzer Prize, Grammy Award, Emmy Award, Tony Award-winning composer, lyricist, and actor, Lin-Manuel is the creator and original star of Broadway’s Hamilton and In the Heights, and the recipient of the 2015 MacArthur Foundation Award and 2018 Kennedy Center Honors. He has been an active supporter of relief efforts in Puerto Rico post-Hurricane Maria. He lives with his family in New York City.”

But, most recently, he is known for performing a medley of songs from Encanto on The Tonight Show with Jimmy Fallon.

The Tonight Show posted a TikTok video in all its wondrous glory!

Jimmy and #LinManuelMiranda perform a medley of songs from Encanto! #FallonTonight

Complete with costume changes between each song, Fallon and Miranda sang-

The rest of the interview consisted of talking about Miranda’s experience taking his youngest to go see Hamilton for the first time. Spoiler alert, his son falls asleep after hearing his “bedtime song”.

They also talk about Miranda’s brand-new song book that just came out. It has everything from In The Heights to Hamilton to Encanto.

They also discuss Weird Al Yankovich’s new movie coming out called Weird. Daniel Radcliffe plays Weird Al, and Miranda might just have a cameo in it too. The very first time Mr Miranda met Weird Al was at a job interview. Lin-Manuel actually talked Yankovich out of hiring him!

Starting November 10th, Lin-Manuel Miranda is heading to a residency in Vegas, at the Venetian with “Freestyle Love Supreme“. They are an improvisational hip-hop comedy musical group that was started by Miranda in 2004.

If you happen to be in Vegas the 16th and 17th of November, go check out Miranda perform with his group!

What do you love most about Lin-Manuel Miranda? Let us know in the comments.