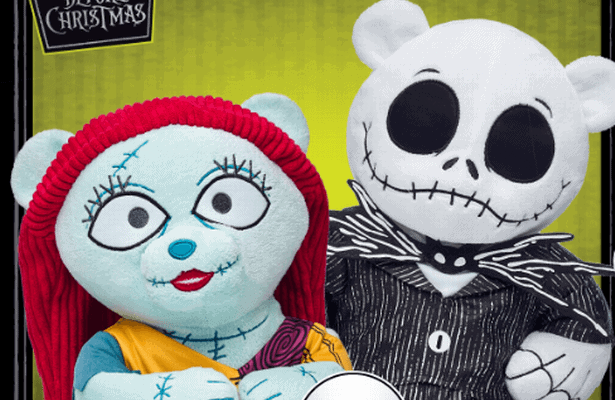 It’s that time of year again! Halloween is right around the corner and who better to greet us than Jack Skellington, the Pumpkin King of Halloween Town. Along with Sally, Oogie Boogie, and the rest of the gang, this frightful bunch has taken over Build-A-Bear. Build-A-Bear is celebrating its 25th anniversary this year and has pulled out all the stops with their holiday choices!

Jack Skellington is a frightfully fun friend for fans of all ages! The Pumpkin King of Halloween Town makes a must-have addition to any Disney Tim Burton’s The Nightmare Before Christmas collection. Enjoy lots of happy hauntings with your own Jack Skellington plush! You can even add his stitched sweetheart Sally to your Halloween Town collection to make every day as fun as Halloween.

Spiral into fun with your own Sally! This stitched-together rag doll from Disney Tim Burton’s The Nightmare Before Christmas captured all our hearts as Jack Skellington’s sweetheart. Share a moonlit dance with this beloved character and add Sally to your collection today!

Roll the dice with Oogie Boogie! This mischievous sack from Disney Tim Burton’s The Nightmare Before Christmas has creepy crawlers around his mouth and green fur with stitches. The one and only Oogie Boogie makes a hauntingly fun addition to any fan’s collection!

The Nightmare Before Christmas started out as a poem by Tim Burton back in 1982 before becoming a feature film in 1993. Jack Skellington- a.k.a The Pumpkin King and Sally are on sale for $30.00 and Oogie Boogie cost $32.00. Along with the plush, you can also get costumes and music for an additional cost.

If Nightmare Before Christmas isn’t your thing, Build-A-Bear also has some Stitch and even Harry Potter for this Halloween season!

The most magical surprises always arrive by owl post! The loyal HEDWIG™ is sure to delight any young witch or wizard with the personalized HOGWARTS™ acceptance letter she carries in her beak. This enchanting gift set is sure to make any HARRY POTTER™ fan’s spirits soar!

Have you ever created a Christmas Jack Skellington Build-A-Bear? Show us in the comments!