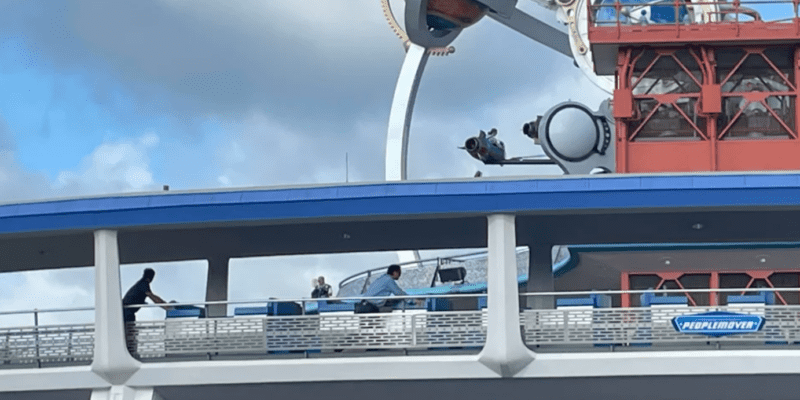 Being evacuated from a Walt Disney World ride can be an experience unlike any other.

Walt Disney World Resort is home to many iconic attractions and experiences that simply can’t be enjoyed anywhere else. Disney Park Guests make their way to Magic Kingdom, Disney’s Animal Kingdom, Disney’s Hollywood Studios, and EPCOT each and every year to experience “The Most Magical Place On Earth.”

Disney works hard to ensure that every experience at Walt Disney World Resort and Disneyland Resort is a magical one, but that doesn’t mean that everything always goes as planned.

A Disney World Guest recently shared that they were forced to sit on the Tomorrowland Transit Authority PeopleMover for more than an hour before eventually being evacuated.

Getting evacuated off the People Mover from WaltDisneyWorld

As you can see in the video, the Guests are forced to walk the tracks of the PeopleMover after the Disney World ride suffered an apparent malfunction. Honestly, there are certainly worse places to be.

The Tomorrowland Transit Authority PeopleMover gives Guests a chance to board an elevated tram for a leisurely voyage through Tomorrowland. During your narrated tour, go behind the scenes of attractions like Buzz Lightyear’s Space Ranger Spin, Space Mountain, and Star Traders retail shop. You can also see the architectural models of Progress City, the prototype for EPCOT.

Just recently, a Disney World Incident Report revealed that a veteran passed out while riding the popular attraction back in September. The 83-year-old tragically passed away after being taken to a medical facility.

Have you ever been evacuated from a Disney World ride? Let us know in the comments!