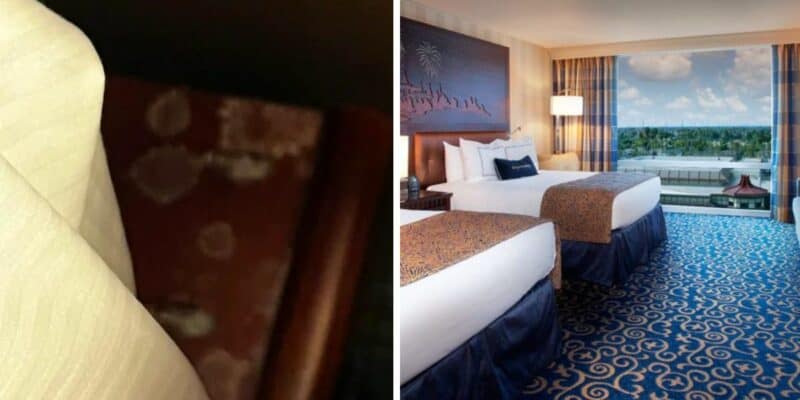 When taking a trip to a Disney Resort, the first thing you may want to do is figure out what Parks you are going to and what rides you want to experience. The Disneyland Resort in Anaheim, California, features a jaw-dropping list of rides and attractions, ranging from classic dark rides like Pirates of the Caribbean and Haunted Mansion to thrilling adventures like Space Mountain and Star Wars: Rise of the Resistance.

There are two Parks at the Resort, that being Disneyland Park and Disneyland California Adventure. Of course, after a long day at the parks, you’ll need somewhere to rest your Mickey ears.

Each one of these hotels is a great choice, but, like all Disney hotels, comes at a cost.

Unfortunately, several Guests have had issues with the overall cleanliness of these hotels recently, sharing photos of their experiences online.

In the photos below, you can see photos of a room at the Grand Californian at Disneyland. The Guest shared the photos online after discovering how dirty and dusty parts of the room were:

While this is quite a small issue, considering that a regular room at the Grand Californian can range from $400 – $800, this is definitely not the standard Guests expect from a premium hotel.

To make matters worse, the Disneyland Hotel did not look much better. A Guest also went to social media to share the photos they took of their room:

We found mold on our beds at the Disneyland Hotel

As you can see, there is quite a lot of mold growing underneath the bed. After seeing these two photos on the Disneyland subreddit, another Guest also shared a photo of old beer cans that they found in their room at the Disneyland Hotel:

I had commented on the Disneyland Hotel bed mold earlier, here is the photo of the beer cans I found.

I had commented on the Disneyland Hotel bed mold earlier, here is the photo of the beer cans I found. from Disneyland

In response to these photos, users responded by the hundreds in the comments. One user said “That was under the bed ? Omg unacceptable for those prices!” Another user said “I hope you reported your situation to Disney. Our last stay at the GCH wasn’t up to standards and we let them know. They gave us our money back since they were unable to get us another room.”

Of course, we don’t expect Disney housekeeping to be perfect 24/7, but seeing these photos is quite shocking.
What do you think of these photos? Have you ever stayed at one of these hotels?