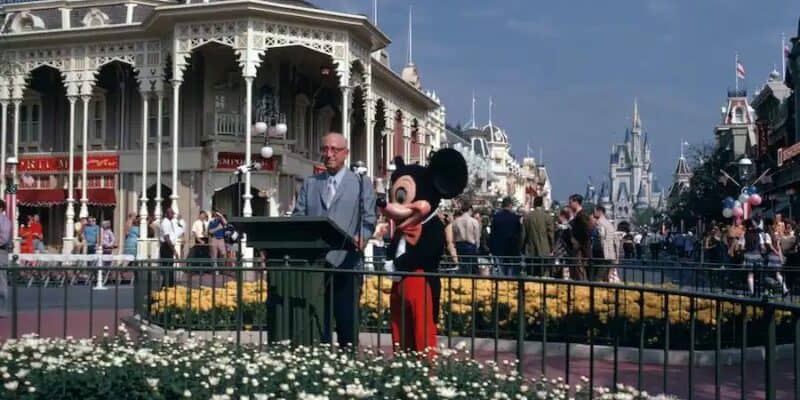 However, it wasn’t until a few weeks later, on October 25th, 1971 that Walt’s brother, Roy O. Disney officially dedicated this Florida-based Park.

The Dedication Plaque was read aloud by Roy O. Disney and alongside him was the closest thing he had to Walt- Mickey Mouse.

“Walt Disney World is a tribute to the philosophy and life of Walter Elias Disney … and to the talents, the dedication and the loyalty of the entire Disney organization that made Walt Disney’s dream come true. May Walt Disney World bring joy and inspiration and New Knowledge to all who come to this happy place … a Magic Kingdom where the young at heart of all ages can laugh and play and learn – together.”

Disney Cast Members, celebrities, and thousands of guests were on hand to mark this huge milestone.

A special parade called Walt Disney World on Parade was held on the 25th. It was headed by Mickey Mouse playing a massive bass drum. It also had 5,000 performers, including a 1,076 piece marching band.

28 Years later, on October 25th, 1999, a special statue of Roy and Minnie Mouse titled “Sharing the Magic” was dedicated and put near the spot where Roy gave his speech in 1971. The same Disney Legend that made the “Partners” statue of Walt Disney and Mickey Mouse commissioned this statue as well- Blaine Gibson.

Last year marked the 50th anniversary for Walt Disney World. Two more statues have been placed at the Magic Kingdom up near Cinderella Castle. Golden sculptures of Mickey and Minnie were given to Cast Members- past, present, and future.

Where you there for the dedication? Let us know in the comments.