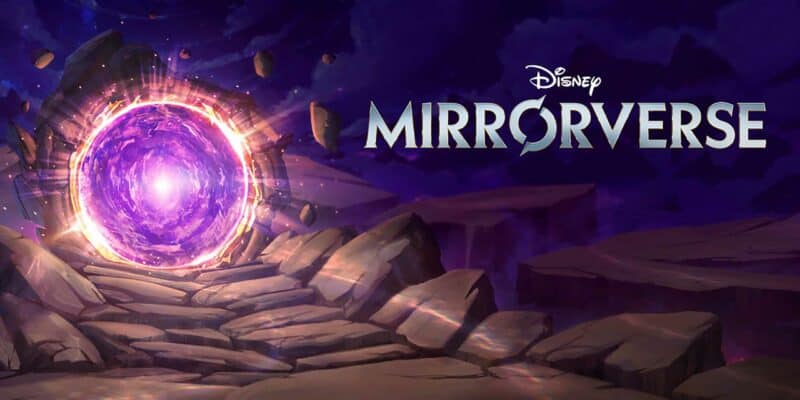 In case you’re wondering what the Mirrorverse is- simply put, it is a divergent universe featuring Pixar and Disney characters. They are amplified, empowered, and ready to defend against an unrelenting and dark threat. You go on epic quests to defeat the fractured forces seeking to shatter the Mirrorverse.

This game is an RPG for your mobile device.

“Long ago, two stars collided to create an altered universe full of light and dark forces. In the Mirrorverse, Stellar Magic has evolved familiar worlds, now threatened by hordes of unrelenting fractured enemies.”

Each character you choose (Guardian) possesses special attacks that are unique an authentic to its character.

There are currently 47 different characters you can choose from- both villains and heroes.

You can have Maleficent, Oogie Boogie, Scar, Ursula, or Hook as some of the many villains to choose from. There are also princesses like Belle, Merida, Ariel or Rapunzel. Not to mention plenty of Pixar characters like Sully, Anger, Mr. Incredible, and Woody.

New characters have emerged this month to help aid the Guardians.

“Sarcastically cruel and explosively volatile, in the Mirrorverse, Hades is amplified to command the denizens of his Underworld realm like an army that obeys all orders from their fiery general.” His abilities include- Last Laugh, Flames of Tartarus, and Well of Souls.

“Cruella is infamous for her high-flying capers and daring escapades. And if any meddlers get too close, she carries a sonic disruptor that sends them running.” Some of her abilities include- Seeing Spots, Neural Suppression Canon, and Ruthless ingenuity.

“Stellar Magic in the Mirrorverse has amplified Jack’s scare powers along with his holiday spirit. His holiday mash-ups bring cheer to his fellow Guardians, and fear to the Fractured enemies.” A few of Jack’s abilities are- Holiday Spirit, Tricks and Treats, and Stocking Stuffers.

You are able to download this game for free on the App Store or Google Play.

Have you played Disney’s Mirrorverse before? Which character is your favorite? Let us know!

Comments Off on Disney Mirrorverse Is Adding New Characters