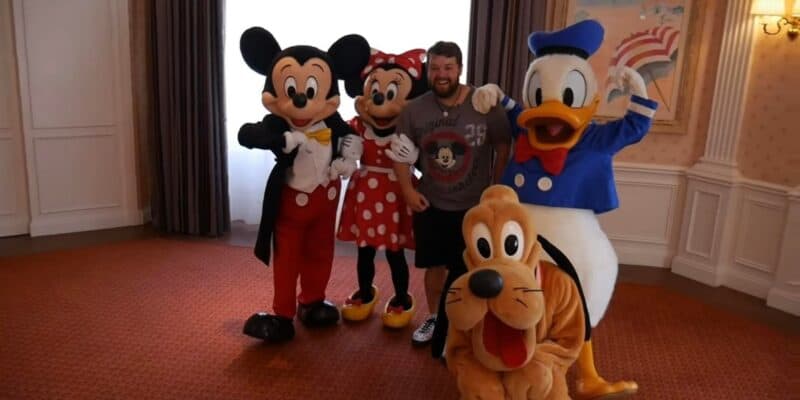 One such encounter happened when he went to Disneyland Paris.

Brian got his degree in Vocal Performance and specializes in impressions and animation. He has worked for big companies like Sony Pictures Animation as Dracula in Hotel Transylvania: Transformania (2022) and Teen Sideburns in Disney’s Tangled the Series (2019).

On a trip to Disneyland Paris, Brian was having a meal at one of the character dining restaurants. The first character to greet him was Pluto and was blown away to hear Brian greet him as Mickey Mouse.

He easily transitioned from one character to another, all staying within the Disney Universe.

Pluto loved the voices so much, that he pulled up a chair next to Brian and motioned for him to continue on with more voices. After almost a minute and a half of just listening to him, Pluto gets up in a hurry and motions that he’ll be right back.

He runs into another part of the restaurant and quickly comes back, dragging Donald Duck behind him.

Brian greets Donald as Donald Duck and blows him away.

Like before, Brian goes through a few voices with Donald and Donald can’t stop hugging him. And, just like Pluto, Donald pulls up a seat and motions for more.

The second Brian does an impression of Minnie, Donald shoots up and runs out of the room. A moment later, he comes back with Mickey in tow!

He greets Mickey the same way he greeted Donald, by talking like Mickey himself.

Mickey is more than a little mesmerized.

For a solid 10 minutes, all the characters keep coming back to the table motioning different characters in hopes of Brian figuring out what they want to hear.

But the real kicker— after the meal finished, Brian was greeted by a Cast Member that told him that all the characters wanted a picture and story time with him!

He got to go into a private room and regale the characters as the Mad Hatter.

Talk about one magical trip!

Have you ever received special treatment at a Park before? Let us know in the comments.

Comments Off on Brian Hull Leaves Disney Characters In Shock