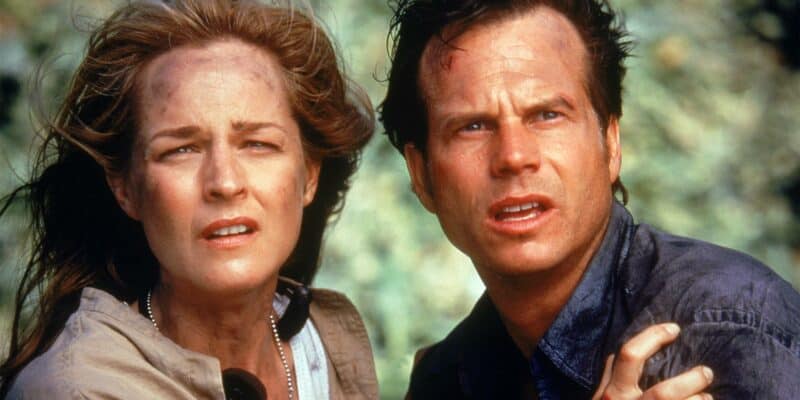 After 26 years, Twister is finally getting a sequel- according to a Universal representative on Tuesday, October 18th.

The movie premiered in 1996 and was a blockbuster smash hit. It brought in $490 million dollars, making it the second highest-grossing film in ’96.

The original movie starred Helen Hunt (as Jo Harding) and the late Bill Paxton (as Bill Harding). Set in Oklahoma County in 1969, a young Jo Harding, and her family got hit by an F5 tornado- the strongest tornado known to man. It went right through their farm and over the storm cellar, killing her father. Since that moment, Jo became obsessed with them and eventually (27 years later) became a storm chaser. She spent her adulthood chasing tornadoes with a team of people trying to create an early tornado warning system and getting there faster than her competitor Jonas Miller (Cary Elwes).

Amblin Entertainment and Universal Pictures are developing the sequel, Twisters, and Warner Bros. Entertainment will be co-financing the film.

The sequel, Twisters, is rumored to have Helen Hunt return as Jo, and to have the sequel be about her daughter following in her parent’s footsteps as a storm chaser.

Universal has not yet confirmed whether or not Helen Hunt will be reprising her role as Dr. Jo Harding. Sadly, two others will not be returning. Bill Paxton, who played opposite Hunt, sadly passed away in 2017 from complications from heart surgery, and Philip Seymour Hoffman (Dustin Davis) passed away in 2014.

Many people cannot see the film getting a sequel without Paxton (The Extreme) and Hoffman. However, Hunt is excited about the sequel and wants to return.

Also, because of Steven Spielberg’s excitement, three major studios are ready for the sequel as well- Warner Brothers, Amblin Entertainment, and Universal Studios.

What do you think? Are you excited for the Twister sequel?! Let us know in the comments.