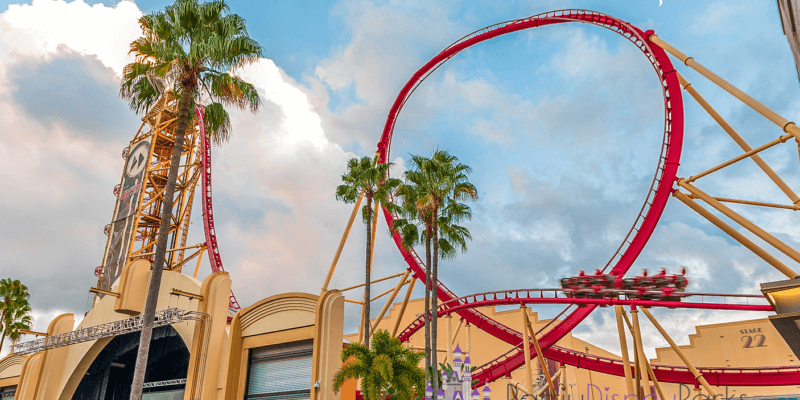 Universal Orlando Resort is home to many classic and iconic attractions, such as E.T. Adventure Ride, MEN IN BLACK: Alien, Revenge of the Mummy, Despicable Me: Minion Mayhem, and Transformers: The Ride 3D at Universal Studios Florida, as well as the all-new Jurassic World VelociCoaster, Jurassic Park River Adventure, The Amazing Adventures of Spider-Man, and Skull Island: Reign of Kong at Universal’s Islands of Adventure.

The popular coaster gives riders a chance to “rock out” by picking their favorite music selection and take on the intense ride. The coaster even has its own “secret playlist” that gives fans even more options to choose from.

While most of the construction focus at Universal Orlando has been zeroed in on Epic Universe– which is set to open in 2025– there are slight refurbishments and construction projects going on at the other two theme parks, as well.

We are happy to report that, for the first time in years, Hollywood Rip Ride RockIt now has its iconic banner.

The banner has been missing for quite some time, at least prior to the COVID pandemic, but just in time for Halloween Horror Nights, Universal has finally replaced it, and it stands tall on the lift hill for all to see.

Theme Park Reporter Alicia Stella recently shared a photo of the banner back in its rightful spot.

It’s kind of weird having the banner back.

It’s kind of weird having the banner back. pic.twitter.com/4YuhMRNOpx

The banner being back gives a little bit of a different feel and is certainly something that diehard Universal fans have waited to see return for quite some time.

Have you ever ridden Hollywood Rip Ride RockIt?