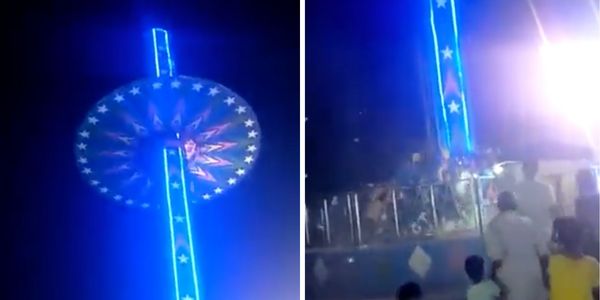 What should have been a fun time on a ride turned into a nightmare for Guests visiting a fairground in India earlier this week.
In a tragic incident, which has now gone viral, a high-rise spinning carnival attraction broke mid-ride and came crashing down at the Dussehra ground in Phase-8 in Punjab‘s Mohali on Sunday. The video shows the ride spinning normally at the very top of the tower, and then all of a sudden, the ride starts falling down a full 50 feet until the attraction smacks the ground, after which screams can be heard.
At the time of publishing this article, no fatalities were shown. However, there were reportedly 50 Guests on the ride, with at least 16 Guests left critically injured. Shortly after the incident, police rushed to the spot to assess the situation. Some reports stated that victims received head and neck injuries.

You can see the full incident in a tweet which is linked below. Just a warning, the footage may be disturbing to some:

Live Visual of swing breaking in #Mohali phase 8, Many people got injured. Around 16 women & kids were hospitalised after the incident.

Live Visual of swing breaking in #Mohali phase 8, Many people got injured. Around 16 women & kids were hospitalised after the incident. pic.twitter.com/bay5IfzHLB

Related: One of Disney’s Most Popular Rides Left Empty as Crowds Vanish

Sunny Singh, one of the organizers said, “We will find out how this happened. It seems there was a technical issue. Earlier too, we organised several fetes but this has never happened. We will cooperate with the police and administration.”

Eyewitnesses also shared information on the incident. Jaspreet Kaur said, “We picked up the injured and rushed to the hospital. There was no ambulance, and even the bouncers of the fete were trying to threaten us. Later, the employees of the organisers also fled the scene.”

Mohali deputy commissioner Amit Talwar said, “We will hold an inquiry and strict action will be taken against the guilty.”