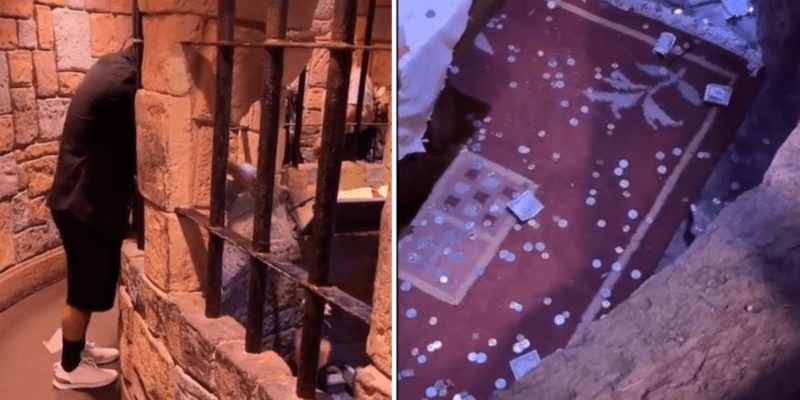 It’s not that often to see spare change spread throughout a Disney ride, but a $100.00 bill is a little less common.

No matter which Disney ride you enjoy most at either Walt Disney World Resort or Disneyland Resort— whether it be Haunted Mansion, Jungle Cruise, “it’s a small world”, Pirates of the Caribbean, Splash Mountain, Space Mountain, Big Thunder Mountain, or any other– there’s a special magic that has gone into these attractions to make them iconic.

Disney donates the change that is seen on “it’s a small world” each year, but this attraction isn’t the only Disney ride where change can be spotted.

One of the most notable is Snow White’s Enchanted Wish, located in Fantasyland at Disneyland Park.

Recently, Guests spotted more than just spare change on the attraction, though. While in the line queue, the Disney Park Guests saw a $100.00 bill and elected to go to great lengths to try and retrieve it.

As you can see in the video, the Guests attempt to fish a $100.00 bill with a belt and then expand the lengths to two belts.

Snow White’s Enchanted Wish takes Guests on a ride as they settle into a wooden mine cart and accompany Snow White as she flees from the evil Queen. You begin your fairytale journey in the cozy cottage of the Seven Dwarfs, then visit dazzling mines filled with glowing gems. Soon you’ll be riding into the Queen’s sorcery chamber and discovering a magic mirror just as Snow White bites into a poisoned apple! When all looks lost, will Snow White find her own happily ever after?

What is your favorite Disney ride? Let us know in the comments!