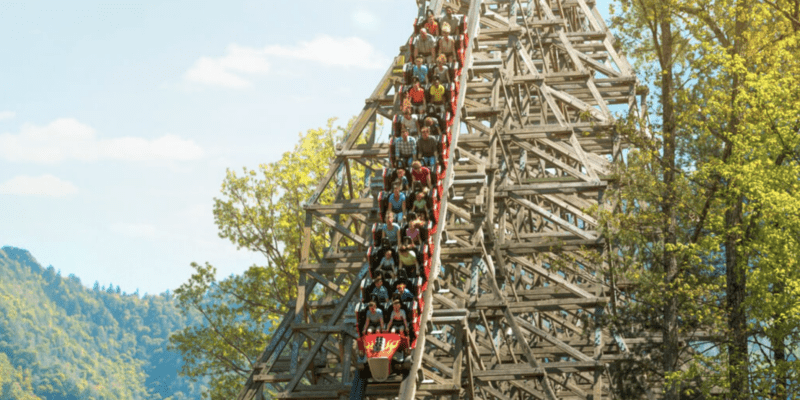 Dollywood has become known as one of the most beloved theme parks in the nation.

The theme park, owned by renowned singer Dolly Parton, has won numerous awards for being one of the best amusement parks in the U.S. and continues to expand its reach.

No matter what theme park you visit– whether it be a Disney Park at Walt Disney World Resort or Disneyland Resort, or if be another across the country like Universal Orlando Resort, Universal Studios Hollywood, Six Flags, Busch Gardens, SeaWorld, Cedar Point, or Dollywood, you want to know that you’re safe.

However, a celebrity who visited Dollywood allegedly came away with long-term injuries.

Noelle Foley, the daughter of WWE and wrestling legend Mick Foley, said she suffered a concussion and neck injury while riding the Mystery Mine attraction in the theme park.

This past weekend, she spoke out about the incident for the first time, sharing it with her more than 200,000 followers. In addition, Foley also shared that she is still suffering from the injuries today, even though the incident occurred three years ago.

This is the first time I’m publicly saying this. My concussion & neck injury occurred at Dollywood on the Mystery Mine coaster. I hope @Dollywood & @DollyParton can make this right & ensure that what happened to me will never happen at their park again.

This is the first time I’m publicly saying this.

My concussion & neck injury occurred at Dollywood on the Mystery Mine coaster.

I hope @Dollywood & @DollyParton can make this right & ensure that what happened to me will never happen at their park again.https://t.co/VwwaVAa1Qr pic.twitter.com/zGVvP2Lgx2

“Today marks three years since my concussion. Three whole years, like that, doesn’t even seem real,” Noelle said. “I’ve never made this public before, but on September 11, 2019, at approximately 1:15 p.m, I got my concussion on the Mystery Mine coaster at Dollywood in Pigeon Forge, Tennessee. I never thought, ‘Oh, I’m going to get an injury and ruin myself on this roller coaster.’ I can’t do any of the things that I once loved. All of the things I once loved just cause me pain. I just truly hope that Dollywood and Dolly can do something. Just to make things right and to make sure that nothing like this happens to anyone ever again at their park.”

Wrestling Inc. noted that she was diagnosed with a rare hearing disorder called Hyperacusis back in May of 2021.

At this point, Dollywood has not offered a statement on the alleged incident.

The Mystery Mine is described as a “steel coaster where a 1,811-foot track travels through an abandoned coal mine. Uncertain encounters and amazing maneuvers await, including a hair-raising 95-degree, 85-foot vertical drop that plunges into darkness.”

What do you think of this incident at Dollywood? Let us know in the comments!