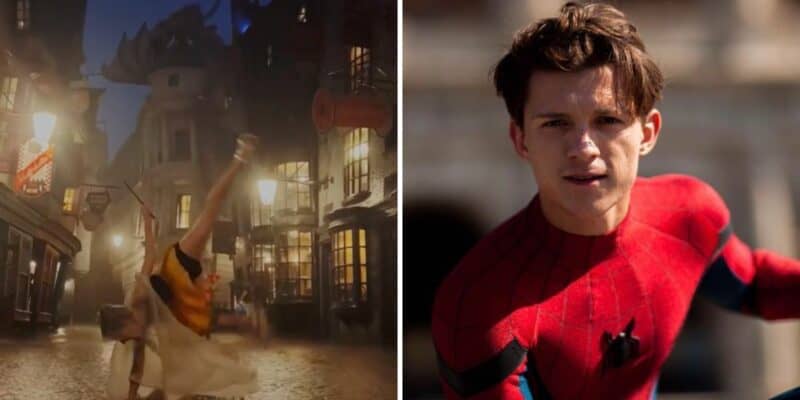 Universal Studios Florida has masterfully modeled the streets of London that the Chosen One once frequented in The Wizarding World of Harry Potter. Down the infamous Diagon Alley, Guests are able to “dine at the Leaky Cauldron, see a wand choose a wizard at Ollivanders wand shop, and get ready to travel deep below Gringotts bank for a multi-dimensional thrill ride” per the official website description, just as Harry Potter and his friends did in the films.

Located in Orlando, Universal’s theme parks are no strangers to the extreme weather that often plagues Central Florida, especially in its June through September wet season. Through large hail, flash floods, streaking lightning, and whatever else the Florida skies bring, the area theme parks are designed to house Guests by the hundreds who are seeking shelter from the at times sudden weather changes.

In many cases, bad weather causes Guests to cut their day short and clear out of the parks so that they may head back to their rooms and enjoy resort amenities. A recent video of Diagon Alley appears to show just that, with nearly a nearly empty street and lightning flashing over the Ukrainian Ironbelly dragon that sits perched atop Gringotts bank.

Rain pummeled the cobblestone, which saw little foot traffic as a result. There were a few remaining Guests who appeared to be running for cover in the clip, and then there was NYC Dancer and Wilhelmina Model Melissa, who saw the storm as a perfect opportunity to dance it out.

Melissa posted a video of her impromptu performance on her TikTok, and it has since been viewed more than 600 thousand times.

The most magical version of umbrella you’ve ever seen. 🌧⚡️🎇📖 can you spot where I rip my poncho? I also did this with no music just singing in my head 😂 @universalpics #diagonalley #harrypotter #umbrella #tomholland

The most magical version of umbrella you’ve ever seen. 🌧⚡️🎇📖 can you spot where I rip my poncho? I also did this with no music just singing in my head 😂 @universalpics #diagonalley #harrypotter #umbrella #tomholland

“The most magical version of ‘Umbrella’ you’ve ever seen,” Melissa captioned her 20-second rain dance to Rihanna’s hit song. A commenter suggested that the lightning was a paid actor.

“If only you had Hagrid’s pink umbrella!” one user wrote in reference to a notorious Harry Potter film prop. “Is that you, Tom Holland?” another user asked.

Some viewers might wonder how Spider-man actor Tom Holland factors into this seemingly random equation. The answer is that believe it or not, Melissa is not the first person to try their hand at recreating Rihanna’s infamous “Umbrella” music video, which was named Video of the Year at the 2007 MTV Video Music Awards.

Tom Holland first appeared as Marvel Cinematic Universe’s Spider-Man in Captain America: Civil War (2016) starring Chris Evans (Steve Rogers/Captain America.) He has since starred in Spider-Man: Homecoming (2017), Spider-Man: Far From Home (2019), and Spider-Man: No Way Home (2021), as well as a few Avengers films and a number of other Marvel projects.

Holland and Zendaya, who also stars in the Spider-Man franchise, were once participants in the American reality show Lip Sync Battle (2015), where celebrities face off in a series of challenges that require them to authentically lip sync to popular music.

Holland surprised everyone in the room when he began his turn with a tamed cover of “Singing In The Rain,” originally performed by Gene Kelly in 1952, before abruptly changing pace and blasting Rihanna’s “Umbrella” overhead. Clearly, his spot-on music video rendition as seen in the YouTube video below is still talked about to this day.

As for Melissa’s magical Diagon Alley “Umbrella” showing, her followers agreed that it was the best video she’d ever posted and that it was enough to make Tom Holland proud.

What do you think of Universal Guest Melissa’s magical “Umbrella” performance on Diagon Alley? Comment your answer below!