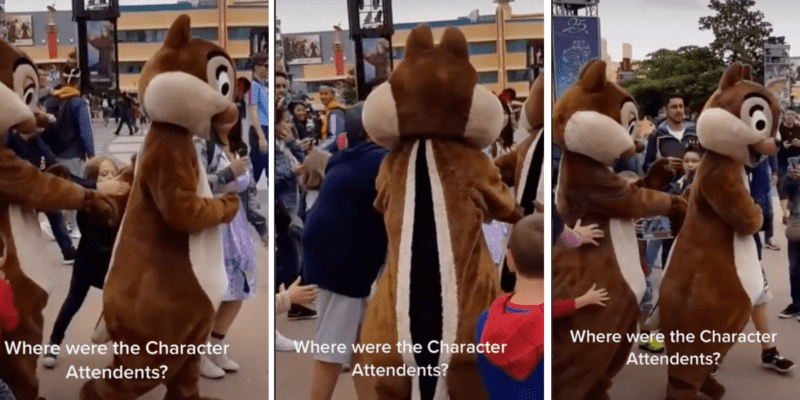 Two Disney characters at a popular Disney Park were recently thrust into an awkward situation.

One of the most magical parts about visiting any Disney Park, whether it be Disneyland Resort, Walt Disney World Resort, or any of the Disney Parks around the world, is meeting and seeing the Disney characters.

Whether it be Mickey Mouse, Minnie Mouse, Donald Duck, Goofy, Pluto, and Daisy Duck, or whether it be some of the fan favorites from Disney properties like Pixar, Marvel, Star Wars, and, of course, your favorite Disney princess, it never gets old meeting those Disney characters who have become an important part of our childhood.

While meeting Disney characters is a fun portion of being in a Disney Park, there are certain rules in place to help keep those characters and Guests safe, as well.

However, an odd situation took place in Disneyland Paris when somehow the character attendants for Chip and Dale were seemingly blocked out and this allowed kids to surround the characters and begin pulling and tugging on them as they were trying to make their exit.

This isn’t the first time that we’ve seen something odd happen with Disney Park characters. Just recently, a video showing Captain Hook using the emergency signal while visiting with Guests went viral. Another video in Disneyland showed Spider-Man having to be helped off backstage after suffering an apparent leg injury.

What do you think of this Disney character video?

Comments Off on Kids Surround Disney Characters, Grab and Won’t Release Them