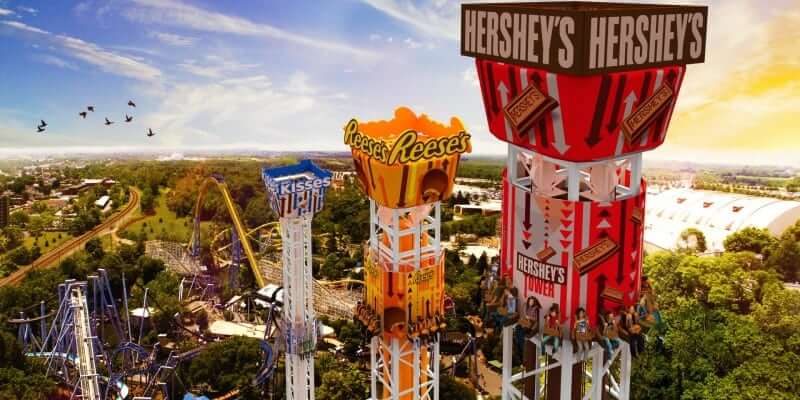 A famous singer was almost kicked out of this popular theme park after security personnel failed to recognize him.

Theme parks are a family-friendly environment where everyone can enjoy thrilling rides, fun attractions, great entertainment, delicious dining offerings, and so many more activities!

To ensure the preservation of this family-friendly environment, as well as Guests’ safety and enjoyment, theme parks often have a series of rules and regulations Guests are expected to comply with during their visit, regardless of their status. While these rules may be slightly different for each theme park, they generally include prohibited items, forbidden activities, and the general behavior expected from Guests.

Due to these rules, and the fact that security failed to recognize him during his visit, famous singer Macklemore was almost kicked out of Hersheypark hours before his performance at Hersheypark Stadium, a massive entertainment venue located on the grounds of Hersheypark.

In the video posted by Macklemore (@macklemore) on TikTok, he comments how he was “dipping” on his scooter, meeting “hella cool people” when he decided to buy some candy to throw out to the crowd at his concert “in exchange for their friendship. While this sounds like a lot of fun for both Guests at the Park and Macklemore himself, an inconvenience arose as the singer entered Hershey’s Chocolate World, the World’s Largest Hershey’s Store.

Security personnel quickly approached Macklemore to inform him that his scooter, which he was still riding and carrying around, had to be parked outside. The singer said that Todd, “the head honcho,” had allowed him to ride his scooter by saying, “I’m the head honcho, it’s cool with me. You have to keep it on the ground, all two wheels on the ground as long as you’re secure.” The security guard obviously disagreed, saying that Todd was not the boss and insisted that the scooter needed to be parked outside.

The singer asked for the guard’s badge number, which he refused to give, and said he’d talk to Todd about the incident before continuing with his candy shopping. More employees quickly recognized him and approached him, as well as several parkgoers who even asked to take a photo with him. However, security backup arrived and escorted Macklemore outside Hershey’s Chocolate World, making the singer feel like he was about to be kicked out of the Park hours before his performance.

It is not clear how the situation got solved or if this whole incident was acted out, but at the end of the video Macklemore “dips away before they call [his] parents,” riding his scooter in what appears to be a parking lot, surely to get ready for his concert later that day at Hersheypark Stadium.

Luckily, the musician could perform on August 12 at Hersheypark Stadium despite this unfortunate, or hilarious, incident.

Hersheypark Stadium is a massive entertainment venue on the grounds of Hersheypark in Pennsylvania. The official website describes the venue as follows:

Hersheypark® Stadium is the most prominent outdoor stadium between Philadelphia and Pittsburgh, hosting events such as the annual Summer Concert Series, regional high school sports, band competitions and more.

Hersheypark is a massive theme park located in Derry Township, Pennsylvania, with over 70 attractions, including exciting roller coasters and thrill rides, family-friendly attractions, kiddie rides, and even a water park! The Park offers Guests a sweet and fun experience with over 80 dining options, several entertainment offerings, shopping, over 40 fun carnival games, the chance to meet Hershey characters, enjoy the sweet wonders of Hershey’s Chocolate World, including the World’s Largest Hershey’s Store, and even explore ZooAmerica, the Park’s 11-acre zoo with more than 200 animals!

The official Hersheypark website describes the Park as follows:

Hersheypark® was originally created by Milton S. Hershey as leisure grounds for employees of Hershey’s Chocolate Factory. Today, our family theme park welcomes guests from around the world to experience Hersheypark Happy® all year long!

Have you ever visited Hersheypark? Let us know in the comments below!

Comments Off on Celebrity Nearly Kicked Out of Popular Theme Park