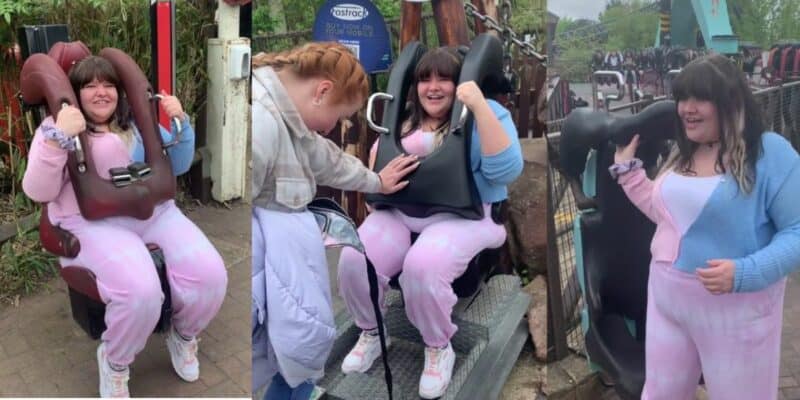 A woman worried about how her appearance might impact her next theme park visit took her curiosity on a test at a popular amusement park in order to test the theory.

Theme parks worldwide have health and safety measures, rules, and strict guidelines to follow to ensure the attraction a Guest chooses to experience is safe and comfortable. However, not all Guests can experience all rides. This could be due to height, weight, or conditions, and information for most of these can be found somewhere within the theme park, or online.

However, for one Guest, it is her size that becomes a source of anxiety during a theme park visit.

Speaking to Need To Know, Heather O’Neill from the United Kingdom discussed how her being a plus-sized individual affects her experiences of visiting theme parks and the confusion, embarrassment, and othering the process can be. She said:

“I was so nervous to go, I nearly canceled out of fear that I wouldn’t fit on the rides […] The fact that I even have to think about if I will fit the rides is the first difference [in being a plus size customer].”

O’Neill then referenced the tragic death of Tyre Sampson at Orlando’s ICON Park in the United States. The young boy fell to his death after riding the new Orlando Free Fall — the world’s tallest free-standing drop tower. It was later revealed that Sampson was over the weight limit but was not prohibited from riding.

“The feeling nervous before going, the pushing the seat down trying to get it to close. Worrying about how safe the ride will be for me, after that poor man died on a ride in America.”

The Guest, who made a TikTok of her visiting the UK’s popular Thorpe Park from Merlin Entertainments– a competitor to Alton Towers Resort, Drayton Resort, and Chessington World of Adventures Resort — to test out as many thrilling rides as possible, likened the experience to other everyday things:

“It’s the same as flying – worrying if the seat on the plane will be too small or I’ll need a seat belt extender […] Theme parks, aeroplanes, buses – society isn’t built for anyone who is outside of society’s norm of straight, able bodied and slim.”

“I used all the test seats that I could find, which most people don’t have to do. But rides aren’t built for plus size/fat people, it’s about accessibility and making spaces inclusive for all bodies and accessibility needs.

“I feel like the staff did everything they could, were helpful and kind, but Thorpe Park is not built for fat people like me.”

In the video, which has since gone viral on the popular social media service, O’Neill can be seen trying out many of Thorpe Park’s popular rides like Rush, Quantum, Vortex, Samurai, SAW — The Ride, and Colossus. For the latter, O’Neill did not fit into the test seat so Thorpe Park employees were able to give the Guest a free FastPass for another attraction.

“At Thorpe Park Resort, we care deeply about creating magical experiences that are inclusive for all of our guests.

“We have always strived to create accessible attractions where people can be themselves and enjoy fun experiences together.

“From team training to listening to guest feedback, our priority is always focused on ensuring every one of our guests enjoys a magical day out with us at the UK’s most thrilling theme park.

As one of the leading UK theme parks and a hotspot for thrill seekers, Thorpe Park Resort also includes Derren Brown’s Ghost Train: Rise of the Demon, The Walking Dead: The Ride, Flying Fish, the Rumba Rapids water ride, Black Mirror Labyrinth, and Nemesis Inferno across eight different territories such as Angry Birds Land, Lost City, and Amity — originally, Amity Cove. The new roller coaster in Old Town under the name Project Exodus will open in 2024.