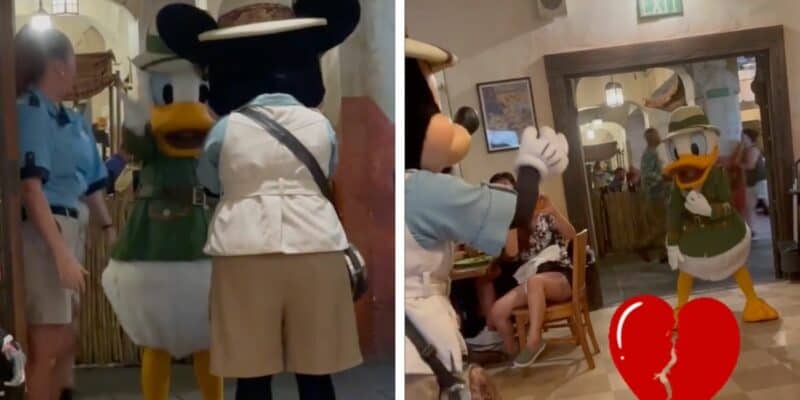 As seen in a video posted to TikTok, Mickey Mouse had some choice gestures for Donald Duck yesterday at Walt Disney World’s Animal Kingdom.

User @howwouldwaltdisney captured the disagreement and shared it to social media:

♬ Glimpse of Us – Joji

In the video, Mickey can be seen stomping at Donald, eventually signaling Donald broke his heart. Donald appears appalled at Mickey’s signals, pointing the finger at him to convince the crowd that he was the one to blame. The fight ended in a dance-off that seemed to leave both characters exhausted.

It’s hard to tell what started the conflict from the footage, but the creator described the start of the drama to those curious in the comment section.

“Mickey was walking like a little old man and Donald and goofy were “telling” him to hurry it up!!” @howwouldwaltdisney wrote. “They hurt his feelings 😂😂”

One commenter called it the best Mickey and Donald interaction they’ve ever seen. The original poster agreed, sharing it went on long after the videos conclusion. “Even goofy got in on it!” @howwouldwaltdisney wrote. “Made our whole trip for sure!!”

The video has reached nearly 50,000 views in just a day, with hundreds of comments agreeing that the interaction made their day.

“They deserve a raise! That was hilarious. 😂😂😂😂 This had me crackling up.”

@JuJubee commented that seeing “Mickey twerking” is when she “really lost it.”

Character experiences are a huge part of the Disney Magic. This specific interaction took place at Animal Kingdom’s Tusker House, but Guests can find their favorite characters at several other locations around the Disney Parks.

While you dine, snap a photo and tip your pith helmet to Donald Duck—suited up and ready for his next safari adventure—along with his Disney friends, as they travel throughout the dining rooms celebrating their latest expedition.

Favorites with a Safari Flavor
Say Jambo to a delightful family-style menu of fantastic favorites and new discoveries!

Younger travelers will find comforting classics like fruit and yogurt for breakfast and mac and cheese for lunch and dinner.

Do you have a favorite Character Experience? Let us know in the comments below!