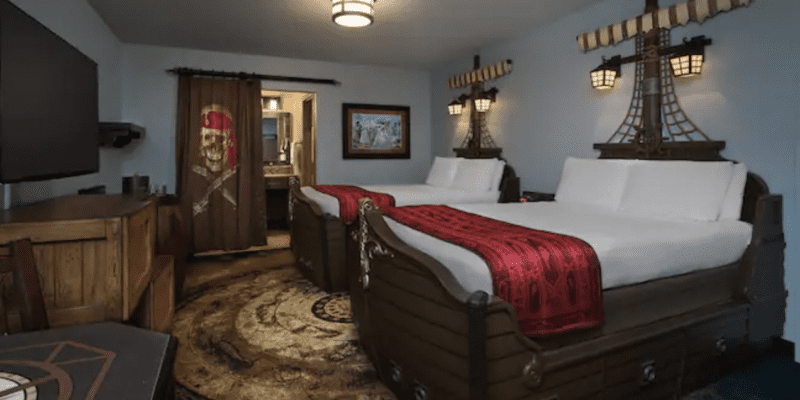 Earlier this year, Walt Disney World Resort officials confirmed that the beloved pirates-themed rooms at Disney’s Caribbean Beach Resort will be removed by 2023.

The rooms were initially expected to be among the most popular at the Resort, but since they were located in the Trinidad building — far from Caribbean Beach’s pool and main lobby area — they never took off quite like Disney expected, seemingly.

The Trinidad permits all expire on April 30, 2023, while the Martinique permits are good through September 1, 2023. At this time, Disney has not confirmed any details about the rooms’ new theme or if any other Guest rooms at the Resort are set to receive a remodel.

If, however, you are interested in staying in a pirate room, you should book your Walt Disney World vacation very soon, as these rooms are likely to close in the very near future now that work permits have been filed.

The official description of this island-themed hotel reads:

Discover a world where life slows to a leisurely pace and worries melt away amidst Calypso rhythms. Awash with vibrant colors and lush landscapes, Disney’s Caribbean Beach Resort transports Guests to a relaxing paradise that captures the essence of 5 distinct islands: Barbados, Jamaica, Martinique, Trinidad and Aruba. Celebrate the spirit of the Caribbean with blissful sights and fun-filled activities—including colonial forts, lively markets, pristine beaches, splashy florals and swaying hammocks—sure to awaken the imagination

What new theme would you like to see in the pirate rooms at Disney’s Caribbean Beach Resort?