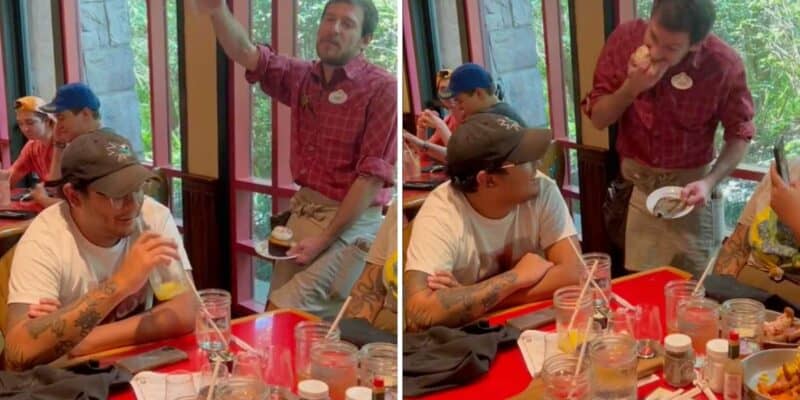 Whispering Canyon Cafe located at Disney’s Wilderness Lodge is known for its “good eatin’ served with attitude,” per their website. The unique dining experience invites Guests to be served by Cast Members whose sass knows little bounds.

This was especially true for one Guest, who claimed to be celebrating his birthday at the Cafe. When the server learned that his birthday was actually a week prior, he called him out in front of the entire restaurant in true Whispering Canyon fashion.

The video posted by TikTok user @myriamgonzales045 starts like many other restaurant tributes might, with the server gaining the attention of the dining room for an announcement and a treat. Rather than congratulating the Guest on another trip around the sun, the Cast Member made the room aware that the Guest was celebrating his birthday on the current date of July 24 and not on his actual July 17 birthdate.

Clutching a cupcake intended for the Guest, the Cast Member confronted the Guest about the tall tale.

“I don’t tolerate Pinocchios, if it’s not your birthday I don’t care,” the Cast Member said. “Come in on your birthday and you’ll get a cupcake.”

The server then ravaged the treat, biting it to pieces before smashing it back onto the plate and dropping it to the table.

Luckily, this is just the interaction the group hoped for when making their dining reservation. This Guest joins a long list of folks who have been relentlessly mocked at the notoriously discourteous establishment.

The following patron made the mistake of leaving food on his plate. @sandrasgrotto posted the hilarious exchange on social media.

When you don’t eat all of your food at whispering canyon, this happens. @disneyparks #foryou #disney #disneyparks #disneyworld #disneyadult #husband #whisperingcanyon

When you don’t eat all of your food at whispering canyon, this happens. @disneyparks #foryou #disney #disneyparks #disneyworld #disneyadult #husband #whisperingcanyon

In this video, the Cast Member is attempting to feed the Guest using a variety of vehicle sounds, as one would do to encourage a toddler to take another bite.

“You don’t like choo choo trains? I’ve got airplanes too,” the server said as he swirled the loaded fork towards the embarassed Guest’s mouth. Noting the Guest’s Chewbacca shirt, the Cast Member then sang his best “Imperial March” for the Star Wars fan in another effort to get him to eat.

Lastly, if you happen to be dining at the Whispering Canyon Cafe and you ask for extras like the following Guests, be careful what you wish for.

Do you have a favorite Whispering Canyon Cafe experience? Let us know in the comments!