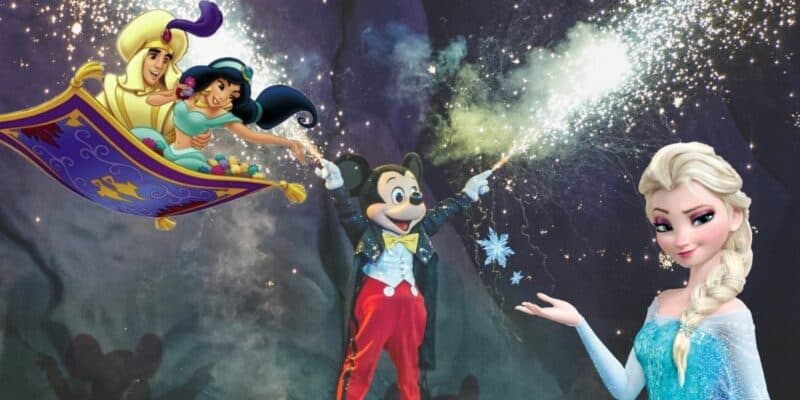 As Fantasmic! currently remains closed to Guests, for now, Imagineers are working hard on getting the nighttime show ready for its return. When it returns, as we previously mentioned, the show will include a new sequence. Disney Parks Blog confirmed the changes coming to Fantasmic!, writing:

Since the official announcement, Disney has confirmed some of the changes fans can look forward to:

Now, as we inch closer to the return of Fantasmic!, Imagineers continue working on the nighttime show as it is undergoing refurbishment. Twitter user bioreconstruct, shared an aerial photo of the Fantasmic! site, writing:

Aerial look at the refurbishment of Fantasmic. Zoom in and there’s trash cans staged at each seating section. Boom lift at left side of the seating is likely for servicing the show lighting.

Aerial look at the refurbishment of Fantasmic. Zoom in and there's trash cans staged at each seating section. Boom lift at left side of the seating is likely for servicing the show lighting. pic.twitter.com/VTj8qUfwEp

As you can see in the aerial photo, Imagineers are working quickly to finish the refurbishment happening at Fantasmc!.

At this time, we still do not have a reopening date for Fantasmic!, but it is exciting to see the refurbishment continuing and we cannot wait to see the new sequence once the nighttime show does return to Disney’s Hollywood Studios.

Are you excited to hear Fantasmic! will return to Disney’s Hollywood Studios? How do you feel about the changes coming? Let us know in the comments below.