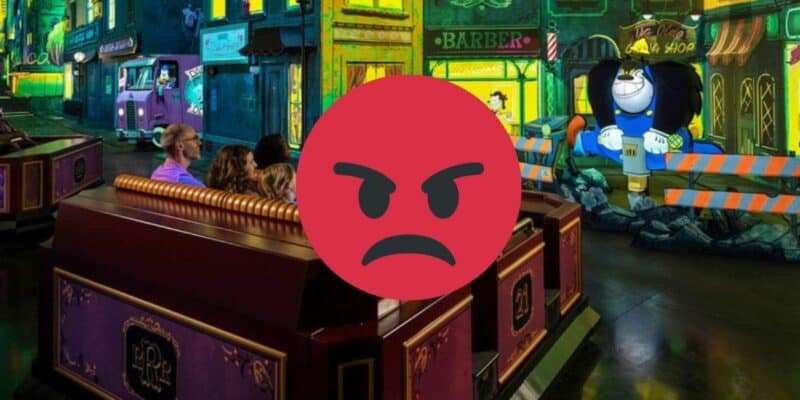 There’s a Yelp page for everything, including attractions, restaurants, and gift shops within the four Walt Disney World theme Parks. Though most reviews are earnest retellings of Guests’ vacation experiences, some Guests take reviewing to another level entirely.

TikTok user @sagestarkeytv recently struck gold when he discovered a Yelp review of Walt Disney World Resort in Florida. He did a dramatic reading of the review here:

Starkey censored the name of the reviewer and the specific attraction it came from, but reverse searching the review on Google leads to the page for Mickey and Minnie’s Runaway Railway, a new attraction at Disney’s Hollywood Studios. The review appears to have been removed.

Mickey, you’ve made a terrible mistake. I had a bad week at your parks. I vented on Yelp. I wrote a few negative reviews. You should have just accepted the feedback and we both could have moved on. But you got petty. You flagged my reviews, and so far Yelp has taken down two. I admit, they were colorful. (Maybe describing you as a Lovecraftian elder god was a bit over the censors’ heads. But I know you understood it. You and I both know what you are.)

And honestly, Mickey, if you’d left it there, I wouldn’t have even known it was you. It could have been one of your cultists. After all they are legion. But you had to tip your hand and respond to some of my reviews on the same day you flagged them. Whoops. That was hubris.

So this is what I’m going to do. For every review that’s flagged and removed from this site (including this one), I will write ten (10) reviews describing my poor experiences at your parks in literal, specific, unflaggable detail. (So far, I owe you 20 new reviews.) And if you make some calls and have my entire profile banned from Yelp, I’ll just start a new profile. And I will post every review. You have no idea how much time I have, Mickey. You have no idea. This is going to be fun.

The anonymous profile has two posted photos and 52 other reviews, so maybe they kept up with their promise to unleash war on Mickey Mouse via reviews after their poor Disney Park experience.

Have you ever found a funny Walt Disney World review online? Let us know in the comments!