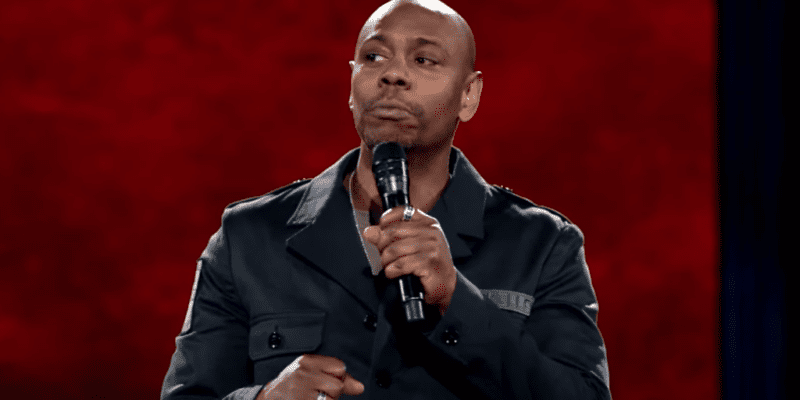 Comedian Dave Chappelle was attacked onstage last night while performing his comedy set at the Netflix Is a Joke: The Festival in Los Angeles.

Dave Chappelle appeared alongside multiple other comedians in his Dave Chappelle and Friends set at LA’s iconic Hollywood Bowl. As part of the wider Netflix Is a Joke Fest, the comedian and actor has been performing his stand-up comedy routine on selected dates since April 28, 2022. His most recent Hollywood Bowl performance last night saw the divisive comedian attacked onstage.

At present, the sequence of events on Tuesday night is not fully known due to the confiscation of attendees’ phones before the performance began but few accounts of the incident have been posted online. The comedian was seemingly tackled by an unknown assailant during his set. One Twitter post from Abazar @abazar showed the attack:

The nature of the attack is not clear, but Deadline reports that the individual striking Chappelle was taken into custody and was armed with weapons. They said:

Los Angeles police confirmed to ABC7 that they responded to a call at the Bowl around 10:45 p.m. They indicated that a man was taken into custody. He was reportedly armed with a gun and a knife.

Deadline also reports Jamie Foxx’s (Dreamgirls, The Amazing Spider-Man 2) words to Chappelle after the comedian returned to the stage:

“Listen, I just want to say…this man is an absolute genius. We’ve got to make sure we protect him at all times,” said Foxx. “For every comedian who comes out here, this means everything. You’re a genius. You’re a legend, and we’re not going to let nothing happen to you.”

Other social media reports of the event claim that Foxx, along with Chappelle’s security, defended Chappelle and seemingly caused bodily harm to the individual, as seen here in more social media footage from RaphouseTV (@raphousetv2):

Man That Attacked Dave Chappelle At His Show At Hollywood Bowl Has Hands Broken and Dislocated pic.twitter.com/ZvPgjdV5gz

Despite the removal of cellphones from the event, one clip shows Chappelle returning to the stage following the incident and joking that “it was a trans man” that had attacked him. His comment comes in the wake of his controversial Netflix comedy special, The Closer (2021) — the sixth installment in Chappelle’s multi-million Netflix deal. Following The Closer‘s release, Chappelle was met with intense backlash over jokes surrounding the transgender community with calls for the streaming service to remove the special. Netflix CEO Ted Sarandos stated Chappelle’s comedy set was freedom of artistic expression.

Alongside his comedy work, Chappelle is also an actor appearing in movies like Universal Pictures’ The Nutty Professor (1996), The Walt Disney Company’s Con Air (1997), and A Star Is Born (2018) alongside Bradley Cooper and Lady Gaga. He is a Grammy Award-winner, earning the accolade three times, most recently taking the Grammy for Best Comedy Album in 2020 with “Sticks & Stones”.

The attack on Dave Chappelle comes just over a month after Will Smith slapped comedian Chris Rock at the 94th Academy Awards following the latter’s joke about Smith’s wife, Jada Pinkett Smith. The actor was issued a 10-year ban from future Oscars ceremonies.

Netflix Is a Joke Fest continues until May 8. Last night was the final performance of Dave Chappelle and Friends at the event.