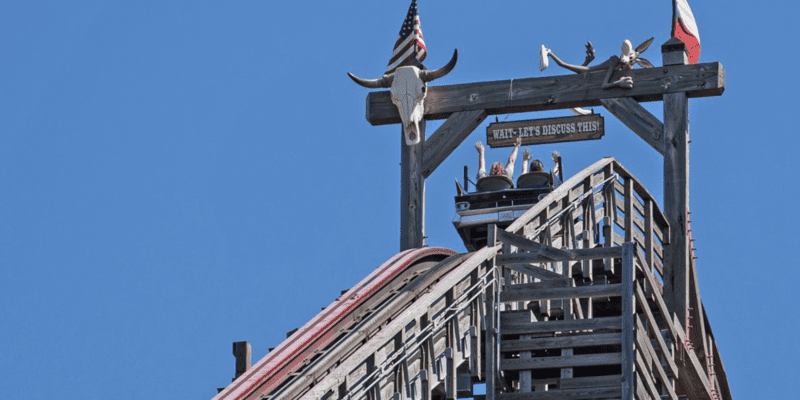 A trip to a theme park can be an experience that leaves lasting memories for the entire family.

When visiting a theme park, there is much more to experience than just the rides and attractions.

In a recent Reddit thread, many users shared some of the “dumbest things” they’ve ever experienced other Guests do while riding a rollercoaster. User U/HikeandKayak shared a story aboard The Texas Giant at Six Flags Over Texas where a rider managed to smack the support beam and almost ripped fingers off as a result.

I once rode the old Texas Giant with a guy whose goal was to slap a support beam. He managed it, and d*** near managed to rip one of his fingers off too. Was real fun for the last 30 seconds of the ride with blood everywhere.

The Texas Giant at the theme park was eventually replaced with The New Texas Giant in 2011. The attraction remains a popular hit today.

The official description of The New Texas Giant at Six Flags Over Texas reads:

Everything is bigger in Texas, and there’s no debate here – you’re looking at one of the best steel hybrid roller coaster in the world. What’s a hybrid? That’s a coaster that combines the best of all worlds – classic wooden architecture and the latest in high-tech steel engineering. It all adds up to the smoothest high-speed wooden course on the planet.

You may remember the legendary Texas Giant from when it first opened as a world class wooden coaster. To celebrate its 20th birthday, this magnificent structure was brilliantly remodeled with the very latest in steel track technology, taking a classic into the new millennium and beyond.

Once you pile into your Cadillac-style train, complete with horns on the hood, you’ll face nearly a mile of all new glistening steel tracks. You’ll race at a gasp-inducing swift 65 miles per hour, starting with a stunning 153-foot high lift then down a spectacularly steep drop at 79 degrees. How’s that for big?

Then it’s onto the action, with high banking turns and swift switchbacks. You’ll power up and down tight slopes with crazy pockets of airtime. Weaving in and out and around the glorious wooden structure, you’ll careen over the humps and bumps of a classic wooden coaster design, but with all the muscle and class of a cutting edge modern ride, until you hit the madcap finish tearing through a set of three sudden misty tunnels. By the time you cruise back to the station, you’ll know why so many people rank the New Texas Giant as one of the best.

Another user shared a story that took place at Disneyland Resort many years ago on California Screaming, which is now The Incredicoaster.

“Watched a woman decide she didn’t want to ride anymore after it left the loading bay and began to move to the start,” User U/burrosjr said. “She was trying to climb through the shoulder straps to get off. This was at Disneyland on then California Screaming now Incredicoaster. If the cameras hadn’t caught her trying to climb out I am sure she would have been decapitated since this one shoots off straight into a tunnel.”

The Guest decided at the last minute they no longer wanted to ride and attempted to climb through the shoulder restraints to get off the attraction.

Of course, all theme parks– including Walt Disney World Resort, Disneyland Resort, Universal Orlando Resort, and others– have rules and regulations that Guests must follow while boarding an attraction.

One of the most common directions given to riders before boarding an attraction is to “remain seated with your hands, arms, feet, and legs inside the vehicle at all times.” These instructions are given to ensure the safety of all Guests, including you and those around you. When on an attraction, you should never attempt to stand while the ride vehicle is in motion. Doing so can result in bodily harm to you or others, and can result in expulsion from the park.

What’s the craziest thing you’ve seen while visiting a theme park? Let us know in the comments!

Let the expert team at Academy Travel help you plan your next magical vacation to Disney World’s water parks, four theme parks — Magic Kingdom, EPCOT, Disney’s Animal Kingdom, and Disney’s Hollywood Studios — and the Disney Springs shopping and dining district! Or, how about a trip to Disneyland Resort to enjoy Disneyland Park and Disney California Adventure, as well as the Downtown Disney shopping and dining district. No matter what Disney Park you visit, you’ll be sure to have a magical time!