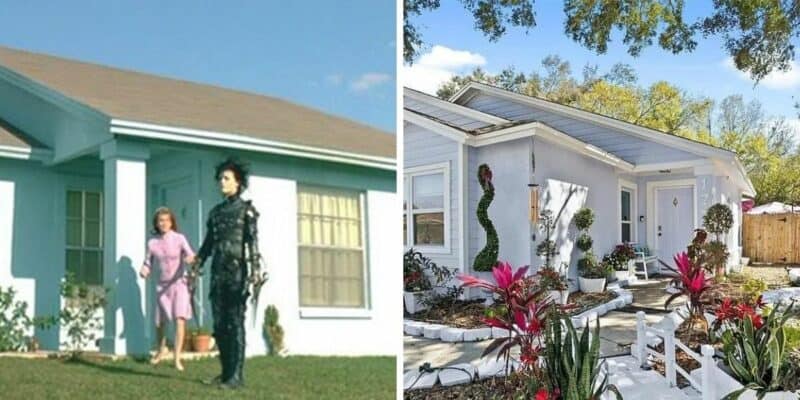 Avon calling! Avon Lady Peg Bogg (Dianne Wiest), the wonderful lady that took in Edward Scissorhands, had a lovely corner home in the “perfect” neighborhood. Hosting 3 bedrooms and 2 baths, the idyllic home is now for sale again, 32 years later, this time brimming with the film’s merchandise. The Edward Scissorhands house can be yours for only $699,900!

The Edward Scissorhands House Is For Sale!

1774 Tinsmith Circle, and its surrounding brand-new neighborhood, was chosen by Tim Burton because it reminded him of the cookie-cutter neighborhoods of his childhood. The 1989 houses were painted solid pastel colors and because of the yards’ ages, they were nearly spare of shrubbery, allowing all the houses to be seen clearly. The neighborhood also hosted a dead-end cul-de-sac, where nothing had been built because of the swampy Florida land (you can see that the cul-de-sac is still undeveloped today).

The end of that cul-de-sac was where the Inventor’s mansion was placed, with false gates and plenty of green screen work. But The Boggs’ house is closer to that location than you’d think… just check out the red arrow below! Peg’s “ride home” with Edward was just up and down these streets.

Tim Burton’s Edward Scissorhands, which debuted in 1990, starred Winona Ryder and Johnny Depp. The film was hosted by Tinsmith Cir, a cul-de-sac in the Carpenter’s Run neighborhood of Lutz, Florida. Nowadays, the 1989 home still sits on the quiet corner, but the trees have grown up over the last 30 years. We’re pretty sure Edward would have trimmed them back, but at least there is shade! The current owner took an incredibly whimsical style in the front yard, with small topiaries, planters, and yard art as far as the eye could see. What you might miss of the robin blue movie exterior, you’ll get when you step inside.

The Edward Scissorhands house has been renovated a few times over its life, now including a replica version of the original wallpaper from the movie over the kitchen original cabinets and countertops. (Of course, the life-size Edward in the corner, comes with the house!) The wall-to-wall white carpet has been removed, bring replaced with tile and vinyl flooring. The main great room has several colors of paint, with more Edward merchandise than you can shake a pair of scissors at. According to the Zillow listing, all the merchandise comes with the home. Edward Scissorhands fans would love to get a slice of this!

The Zillow listing gives us more facts about the house:

This is it! One of a kind Scissorland shrine! Be one of the first families to battle for an epic, historical movie property! The iconic house from the movie Edward Scissorhands is on the market once again! Also known as The Boggs’ house or the Avon Lady’s house, it offers a rare opportunity to live on a nostalgic movie set. The owner restored this home back to the beautiful victorian crafted and whimsical movie set quality on the exterior. Don’t miss the chance to own such a fun and interesting, one of a kind home that comes with ALL the priceless collection of memorabilia from the movie!

Once you step into this home, you’ll feel like you’re on the movie set with replica wallpaper in the quaint kitchen and original cabinets and countertops. This 3 bedroom 2 bath home sits on a nice corner lot, with newer vinyl flooring in bedrooms, and includes all new kitchen appliances(2021), new water heater(2021), whole house security system, new garage door springs and belt with app remotes(2021), a new 75″ LG TV(conveys), and a huge fenced in backyard for friends, family, pets, and backyard BBQ’s!

This home is situated in the best possible location off of SR 54. Located in the beautiful and peaceful community of Carpenter’s Run, it offers a clubhouse, pool, playground, tennis and basketball courts, and is close to the interstate, Tampa Premium Outlet Mall, many restaurants, shopping galore and more! This could be a great second home, investment, starter home, or empty nest home! Call for your personal tour today! If you’re a fan of the movie and would like a different virtual tour, visit @Ourscissorland on TikTok or Instagram!

The yard is full of color and art… and may be the very reason the listing ended up on Zillow Gone Wild. It’s certainly crowded back there!

Would you purchase this piece of movie history for just under $700,000? We would love to see the exterior brought back to its 1990 glory!  Leave us a comment below!

Comments Off on The Edward Scissorhands House Is For Sale!