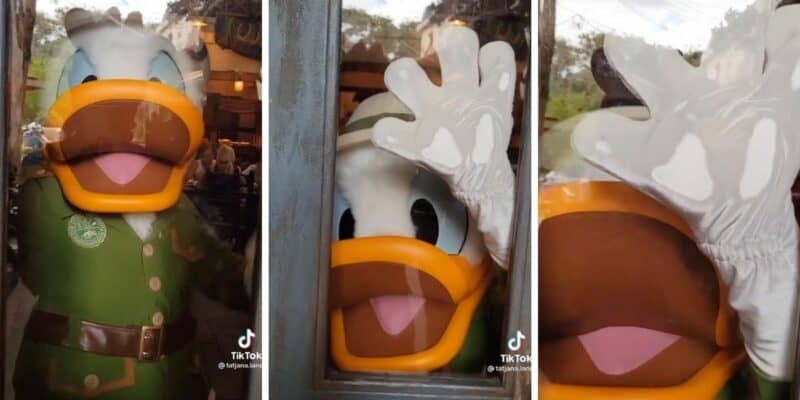 Another popular character dining experience is Tusker House at Disney’s Animal Kingdom. One time, when walking past Tusker House, a Guest noticed Donald Duck attempting to escape the restaurant.

A Guest walking past Tusker House noticed Donald Duck near the door, knocking on the glass while staring at a Cast Member. He had no idea the Disney World Guest was approaching the doorway or saw him doing this, so the Guest walked up to the glass and lightly tapped back on the door.

Donald, who was a bit taken back, stopped knocking on the glass, slowly turned towards the Guest, and then waved right before he slammed into the door, begging the Guest to let him out.

The Guest got a kick out of it, saying they were so glad that they were able to catch this encounter on video. You can check it out below.

If you have never eaten at Tusker House at Disney’s Animal Kingdom, Disney World describes the restaurant as:

A Colorful Restaurant with Character

While you dine, snap a photo and tip your pith helmet to Donald Duck—suited up and ready for his next safari adventure—along with his Disney friends, as they travel throughout the dining rooms celebrating their latest expedition.

Favorites with a Safari Flavor

Say Jambo to a delightful family-style menu of fantastic favorites and new discoveries!

Younger travelers will find comforting classics like fruit and yogurt for breakfast and mac and cheese for lunch and dinner.

Do you love dining at Tusker House? Let us know in the comments below.