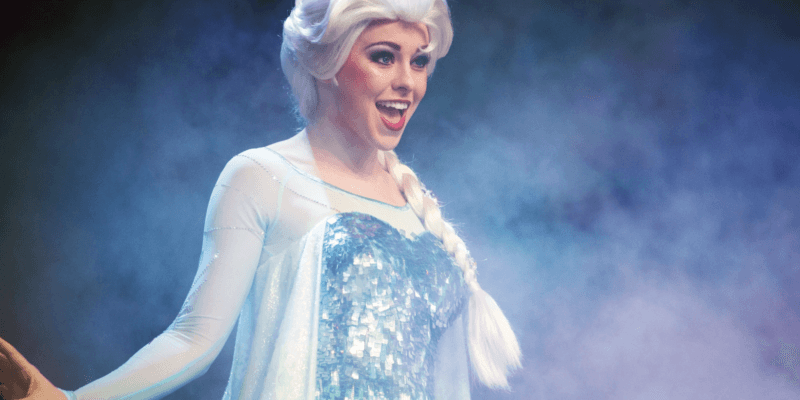 Walt Disney World is certainly the spot to create core memories. Whether it happens on your first trip or your hundredth, these essential moments in our lives can change the course of our emotions forever. Perhaps it’s the smell of Magic Kingdom’s Main Street, U.S.A., or the queue music of Pirates of the Caribbean. Do you remember the first time you saw Indiana Jones run from the stage boulder? The same thing happened to a little girl watching “For the First Time in Forever: A Frozen Sing-Along Celebration.” The moment will leave you in tears, too.

Walt Disney World Resort’s Frozen Sing-Along is so much fun! Not only will you get the classic retelling of the Frozen story, but you’ll also get comedy from the “Royal Historians,” enchantment, and plenty of eye candy. For those that are big fans of the song’s musical numbers, you’ll hear fan-favorite songs like “Love Is An Open Door,” and “Let It Go.” It is the latter song that typically brings people to cheery tears at this show, as snoap falls from the sky, and Elsa proclaims her power.

For one family of Guests visiting Disney’s Hollywood Studios in March 2022, the stage show brought more than just cheer and loud voices. As Elsa took to the stage to perform her quintessential number, the audience naturally broke out into song, as the theater requested. Sitting in the front row, Melissa Nazario and her daughter had up close and personal seats to the performance.

Elsa’s icy powers were so strong, it elicited not only tears, but happy/overwhelming sobs, resulting in (as Oprah calls it) an “ugly cry.” Ugly cries have intense feelings, whether they be sad or happy. It’s a moment of pure emotion, as the littlest Nazario found out, as she belted along with the Queen of Arendelle and pure enchantment tears streamed down her sweet face.

We dare you not to smile, “awwww” or cry along with this little girl. It is no doubt, as Melissa confirms in the video comments, the making of a core memory. Melissa’s caption regarding her daughter’s emotional song reads,

If you’re new to the Frozen Sing-Along, it’s worth the trip. Anyone that has children, a love of Olaf, or enjoys music and comedy has a place here. Disney’s website touts the multi-daily performances as,

The Snow Must Go On

Does the Frozen Sing-Along bring you to tears, too? Leave us a comment with your memories of the Arendelle show!