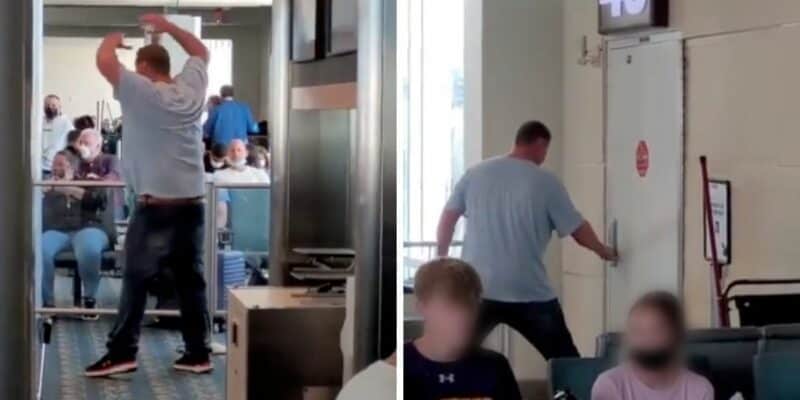 If you are not driving to Orlando, you are likely flying into Orlando International Airport (MCO), the closest airport to Disney. Loaded with a Disney store, Disney World 50th anniversary decor and more, the magic truly does begin the second you step off your plane and feel the Florida humidity touch your skin. Although the airport has a lot of magic for Guests to see, there may be times when Guests are not behaving well, and something must be done.

We recently discussed a drunk woman’s attempt to escape the police by sitting on her electric luggage and trying to out speed the officer on the bike while riding through the airport. The woman was of course caught and detained by authorities. Now, it seems that something worse has happened. Click Orlando reported on a recent incident involving Ryan Martin, a 34-year-old man from Yonkers, New York.

The man was arrested at United Airlines gate 46 at Orlando International Airport with charges of child abuse, domestic violence, disorderly intoxication, battery, and resisting the arrest of an officer. It seems that Martin was drinking heavily and allegedly ended up pushing a woman and her child out of the way when she refused to hold his drink, which set him off into an angry spell. It was not said if the victim was traveling with Martin, or was an innocent bystander. Marin was heard making death threats during his tyrant.

Once more police arrived and Martin refused to get on the ground, he was tasered but was seemingly unaffected. After multiple tases to his body, and with the help of a bystander, the police were able to handcuff him and put him in a wheelchair to remove him from the area. A video of some of the incidents can be seen in the below Tweet from Because Miami (@BecauseMiami). Please be aware vulgar language is used, viewer discretion is advised.

Florida cops Taser man who “had a couple drinks before a goddamned flight” and promises to “put on a motherf**ing show” after allegedly attacking woman and kids at Orlando International Airport; passengers sing “Hey, hey, hey, goodbye!” #BecauseFlorida

Florida cops Taser man who “had a couple drinks before a goddamned flight” and promises to “put on a motherfucking show” after allegedly attacking woman and kids at Orlando International Airport; passengers sing “Hey, hey, hey, goodbye!” #BecauseFlorida https://t.co/VAkdGAgKKN pic.twitter.com/QPRZ9EAiAX

The Magical Express concluded its complimentary service, shuttling Disney Resort Guests to and from Orlando International Airport (MCO) this year, leaving Guests wondering how they will arrive at their Resort without the service.

Mears Connect was announced shortly after Disney noted that they would be ending the Magical Express transportation. Since Disney’s Magical Express was run by Mears anyway, the idea to run this service at a paid premium was a good idea for Mears. Now, Mears Connect can bring you to your Disney Resort and back; however, you must pay per person, and of course, forfeit the fun theming that you were used to on the Magical Express.

Below is a list of the hotels that Mears Connect will travel to:

What do you think of this insane cop chase? Let us know in the comments below!