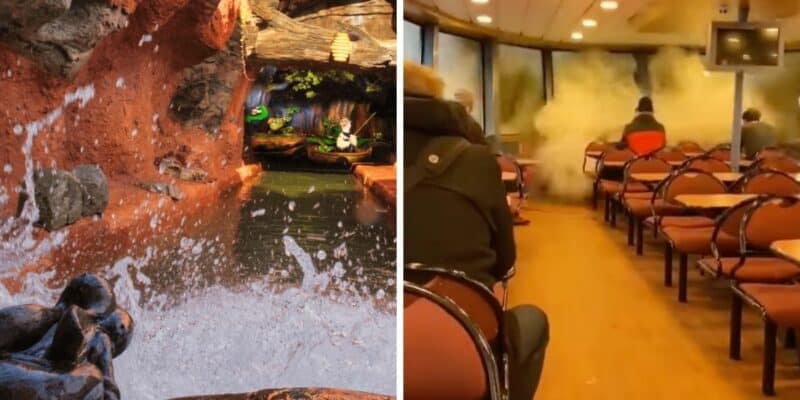 Video footage shows a terrifying moment in Germany where waves crashed into a ferry boat due to a storm, which broke through the front windows and flooded the boat.

A passenger was able to capture the terrifying moments on video from inside the harbor ferry boat. You can see in the video, which was shared to Twitter, the vessel was being thrown around as it sailed down the river Elba between Hamburg and Finkenwerder, seconds before a huge wave crashed into it, breaking the front windows and flooding the inside.

According to Daily Mail, the water that crashed through the front windows of the ferry were due to Storm Ylenia, which hit Germany with 94mph winds.

Passengers were sitting safely in their seats, but after a moment of surprise, when the wave crashed into the front window, breaking the glass, passengers were shown frantically grabbing their belongings and running towards the back of the ferry to try and stay safe.

German news outlet MOPO reported the ferry was traveling Route 62, which runs down the river Elba between Hamburg and Finkenwerder – a suburb of the city. Reports confirm that no one had been injured.

When Disney fans saw the footage of the ferry boat, many immediately thought of Splash Mountain, a popular ride at the Disney Parks.

Splash Mountain brings Guests through a Southern bayou along with the iconic character Br’er Rabbit as he looks for his “laughing place.” But watch out because Br’er Bear and Br’er Fox are around every corner trying to catch Br’er Rabbit.

The ride plummets Guests down a 50 foot drop, crashing into the water waiting for them at the bottom, which soaks Guests. Many fans found the video of the Germany ferry boat very similar to Splash Mountain.

What did you think of this video of the Germany ferry boat? Let us know in the comments below.

Comments Off on Wave Crashes INTO Front Windows of Boat, Reminds Fans of Splash Mountain