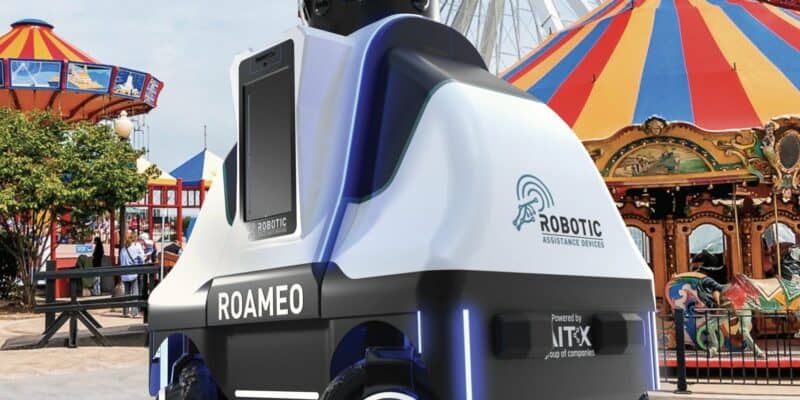 Could you imagine robots taking over Walt Disney World or Universal Orlando Resort? Well, it seems that robocops patrolling theme parks is not something that is too far off. Six Flags Texas has begun to use a new robot security technology that involves a real-life robot patrolling the Park. Six Flags Magic Mountain is set to bring the robot to their Park next in California, but the company who created the bot is eyeing Disney and Universal next.

When Guests visit theme parks, they often expect to see characters that they can meet and greet! When at Disney, Mickey Mouse, Minnie Mouse, Rapunzel, Cinderella, Tiana, Belle, Donald Duck, Goofy, Pluto, and many more. At Six Flags, Guests flock to Bugs Bunny and the rest of the Looney Toon gang. Now, however, there is a new pal in town.

The publication continued to outline the massive robot:

The 6.5-foot, 750-pound autonomous officer looks more like the illegitimate offspring of Wall-E and Baymax than Robocop. It’s equipped with cameras, a touch screen, speakers, and a two-way communication system. And listed among its abilities is recognizing when people are in restricted areas and determining when they’re not wearing face masks.

It can also provide information on ride wait times and tell people how to get to certain attractions. It will not, however, directly respond to infractions.

Robotic Assistance Devices (RAD), the company behind ROAMEO will have 100 robots patrolling theme parks by the end of the year, and are reportedly set to enter the Orlando theme park sphere this year as well. It was not noted which of the three parks will see the robot, but it is likely between Disney World, SeaWorld, and Universal Orlando Resort. That being said, it was reported Disney is not in talks with the company, so it seems that the Disney collaboration is a pipe dream at the moment.

It seems that ROAMEO is not meant to replace humans, but to assist current security guards at theme parks. Considering the robot is not able to actually interfere with any ongoing infractions or disputes, real humans would need to step in to settle those and to ensure Guest safety. That being said, this new technology would be very interesting to see implemented in the Parks. Considering we live in a pandemic era where some theme parks still enforce mask mandates, these robots could help to patrol whatever is needed by the Park.

With tourism in Orlando only continuing to increase and Epic Universe, an entirely new Universal theme park on the way to the city, the need for more security at any theme park will surely increase with the demand.

What do you think about this new robot technology? Let us know in the comments below!

Let the expert team at Academy Travel help you plan your next magical vacation to Walt Disney World Resort’s four theme parks — Magic Kingdom, EPCOT, Disney’s Animal Kingdom, and Disney’s Hollywood Studios — and the Disney Springs shopping and dining district! Or, you can go to Universal Studios Florida, Islands of Adventure, then eat some dinner and grab a drink at CityWalk. Want to take a splash? Volcano Bay is ready for you. With so many fun events like Mardi Gras, Halloween Horror Nights, and more, Universal will give you an action-packed adventure like you are in the movies!