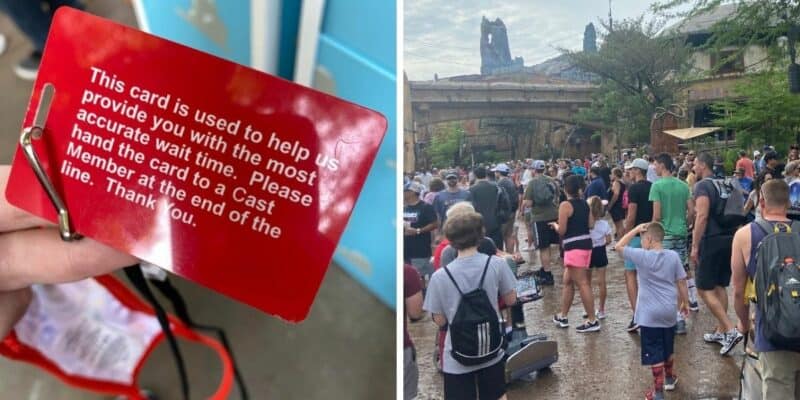 Due to the ongoing pandemic, Disney World and Disneyland stopped using the red card system to predict wait times. This forced Disney to estimate how long the wait times were based on the number of Guests waiting in line, which was sometimes inaccurate, especially when social distancing measures were in place at the Parks.

Now, it looks as though that fan-favorite red card system is back, at least at Disneyland!

In case you aren’t familiar, how the red card system worked was a Disney Cast Member would select a Guest at random and handed them a red card. This card clocked how long that Guest waited before boarding; but, with the ongoing pandemic, the red card system was not in place for a while.

Now, however, it looks like Disney has brought the red card system back as a Guest was spotted with one at Disneyland!

It seems as though the red card system has been back at Disneyland for a few months now as a Reddit user started a thread, as seen below.

Anyone else get excited to get the red cards? We shriek everytime. from Disneyland

But it is great to see it has stuck around as Twitter user, sincerelyivy, recently shared of photo of herself holding up the iconic red card on her recent visit to Disneyland.

She caption it “IYKYK”, which stands for “if you know, you know.”

If you ever got a red card, you know that it is an “honor” and many Guests get extremely excited when they are handed one.  Now that it is back, we can hope that the wait times posted on attractions will be more accurate.

At this time, we are unsure if Disney World brought the red card system back. Inside the Magic will update you as we get information.

Are you happy to see the red card system return to Disneyland? Let us know in the comments below.