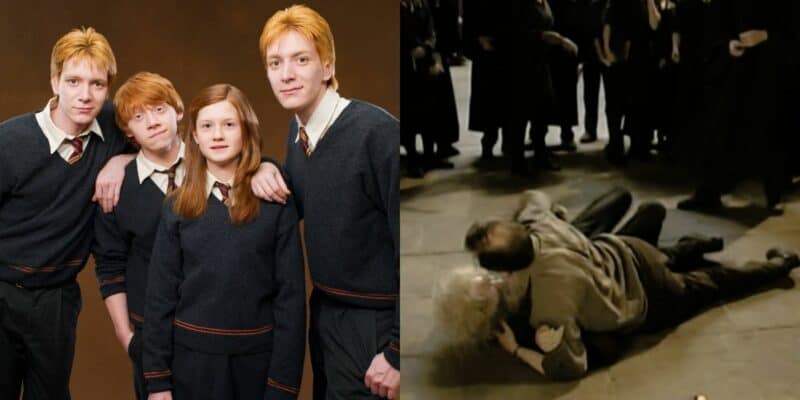 As the world rang in 2022, the New Year brought with it the debut of the much anticipated Wizarding World documentary, Harry Potter 20th Anniversary: Return to Hogwarts (2022).

The HBO Max film, which also streamed on the UK’s NOW platform, delivered a reunion of the ages and a bounty of nostalgia and sentiment. What it also showcased to fans of the Harry Potter series were the many mishaps that happened behind the scenes, with one incident resulting in a set of broken ribs.

When JK Rowling’s “Harry Potter and the Philosopher’s Stone” (1997) was released, little did people know the books about a young boy wizard, Hogwarts School of Witchcraft and Wizardry, and a host of magical creatures would go on to dramatically change the cultural landscape like never before. Fast-forward four years and Chris Columbus’ feature film of the same name debuted to critical and commercial acclaim, launching actors Daniel Radcliffe (Harry Potter), Emma Watson (Hermione Granger), and Rupert Grint (Ron Weasley) into super-stardom.

It’s safe to say that Harry Potter and the broader Wizarding World is one of the most popular franchises in the world. Boasting seven books, eight movies with billions of dollars gross, theme parks, spinoff films, and multiple new editions of Rowling’s novels, the popularity of Harry Potter and characters like Lord Voldemort, Albus Dumbledore, and Sirius Black has no signs of waning.

However, fans were forced to reconcile their feelings of the franchise due to Rowling’s vocal debates over feminism and transgender issues. This situation has even led to Fantastic Beasts film studio, Warner Bros., seemingly distancing themselves from the controversial writer. Rowling explained her views, aiming to provide clarity, in an extended blog post on her website earlier this year. While trends like #IStandWithJKRowling often ignite online, the backlash against the once celebrated children’s author has been tremendous with the author missing from the recent celebratory reunion special. She was only seen in archive footage.

Harry Potter 20th Anniversary: Return to Hogwarts saw many of the franchise’s movie cast and crew reunite in an emotional feature-length documentary with never-before-seen footage and commentary from those involved in the mammoth cinematic event. The anniversary special saw Jason Isaacs (Lucius Malfoy) reveal how he once injured Tom Felton who plays his on-screen son, Draco Malfoy, as well as including a rather confusing image of a young Emma Roberts instead of Watson.

The Harry Potter special revealed that during the filming of Goblet of Fire, Newell injured himself while directing a scene including the Phelps twins, James and Oliver, who play Fred and George Weasley, respectively. Fans of the series will remember that the two mischievous twins are bewitched by a spell Dumbledore (Michael Gambon) sets up to protect the Triwizard Cup, leaving the characters aged to greying old men.

As Newell tells viewers in Return to Hogwarts, he really wanted Fred and George to go for it with their fighting so much so he got on the ground to demonstrate. He said:

“I remember gripping [James] around the waist and trying to fling him about and so forth and cracked a couple of ribs and so I was in absolute agony from then on.”

Newell says though, despite his injury for the Harry Potter shoot, it did alleviate some of the potential pressure on set. He said:

“…but then of course the wonderful thing was that I had made a complete twit of myself and everybody felt much better for that.”

For fans wanting more of the Wizarding World, Fantastic Beasts: The Secrets of Dumbledore (2022) will release this year. And for vacationers, Universal theme parks offer Guests a chance to fully immerse themselves into the magical world of Harry Potter, allowing them to shed their muggle clothes and become the wizard or witch they were born to be.

Have you watched the documentary yet? Let us know in the comments!