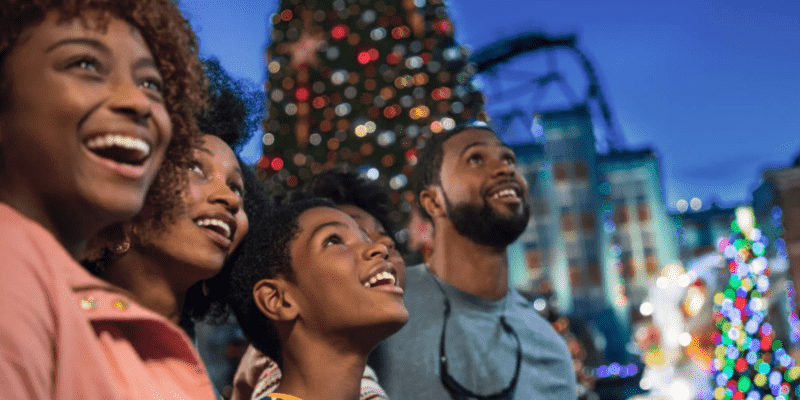 The fun is in the details.

If you’ve ever been to Universal Orlando Resort or Walt Disney World Resort during the holiday season, you’ve likely noticed the incredible detail that has gone into bringing the Parks to life.  Everything is placed with a purpose, and nothing is done by accident.

In a recent photo from Schmidtmas (@MrFurious32821), we can see that detail shining through at Universal Orlando.

The Christmas wreath, which was placed on the stage right before you enter the KidZone, has a purple dinosaur on it, paying respects to the most recent attraction to become extinct: A Day In The Park With Barney.

A Day In The Park With Barney, which debuted in 1995, was a singalong show that featured Peek-A-Boo, B.J., Baby Bop, and, of course, everyone’s famous dinosaur Barney. Universal permanently closed the attraction earlier this year.

In the place of the Barney show, Universal has added the interactive DreamWorks Destination that allows Guests the opportunity to meet their favorite DreamWorks Animation characters from many different films including Trolls, Madagascar, Kung Fun Panda, and more.

Here’s what Universal says about the experience:

Located in the KidZone area of Universal Studios Florida, DreamWorks Destination will be a first-of-its-kind character experience where guests can interact with multiple beloved characters from DreamWorks Animation’s hit film franchises, Trolls, Madagascar, Kung Fu Panda and more – all in one festive location. Catchy tunes from various DreamWorks movies will fill the air as guests enter a bright, colorful party atmosphere – all set against a nighttime sky inspired by the animation studio’s iconic opening sequence from its films. As bright lights illuminate the scene, guests will connect with their favorite DreamWorks characters, grab some fun photos and even join them for an epic dance party that will get every member of the family to move it, move it.

Universal has done an excellent job leaving little Easter eggs around the Parks– whether it be during the holiday season or year-round– to remember many defunct attractions and we can expect that the same will be the case with A Day In The Park With Barney.

What details have you noticed around Universal Orlando Resort when looking at the holiday decorations?