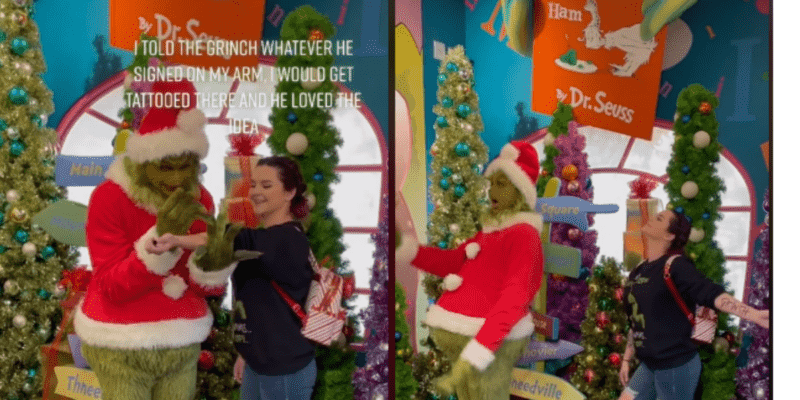 It’s the most wonderful time of the year, and everyone’s favorite meet-and-greet is back in full swing.

After a distanced version last year, The Grinch at Universal’s Islands of Adventure in Orlando is back to meeting with all his beloved fans on an intimate level inside of the Suess Landing book store.

Over the past few weeks, we’ve seen several videos go viral of The Grinch interacting with Guests, but this one might leave the most permanent impression.

Bre (@b.re.anna) on TikTok posted a video meeting with The Grinch where she told him she would get a tattoo of anything he drew on her arm. She wrote:

The Grinch took her up on the bet and wrote in big, bold letters “GRINCH” across her left arm.

Just a couple of days later, she posted an update to the original video showing her new ink, writing:

Meeting The Grinch is one of the highlights of the holiday season at Universal Orlando Resort and at Universal Studios Hollywood in California. It’s a unique experience, and there’s never a dull or predictable moment when he’s around.

Warm Fuzzies With a Side of Sarcasm.

Have you met The Grinch this holiday season? Share your experience with him in the comments below!