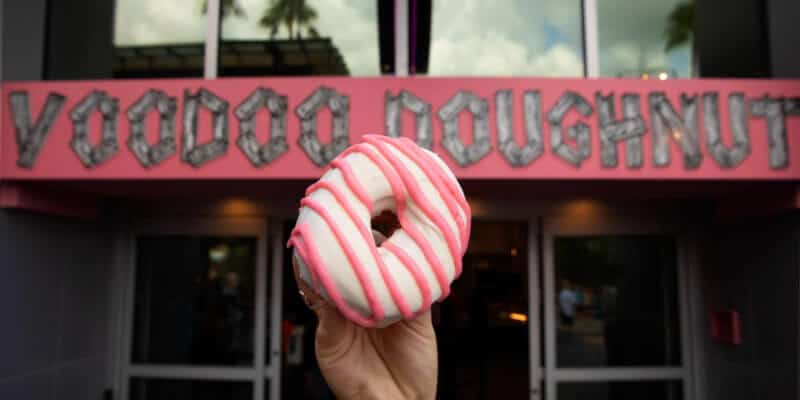 One of the most popular destinations for Universal Orlando connoisseurs to visit is not actually in the Parks themselves.

Universal’s CityWalk has a life of its own and can be seen hosting thousands of Guests night-in and night-out during Park hours, as well as after the Parks have closed. Those who visit CityWalk can enjoy a plethora of dining, shopping, and entertainment options, such as a movie theater, clubs, and mini-golf course.

Whether it be in the morning for breakfast, an afternoon snack, or a late-night dessert, one of the centerpieces of Universal CityWalk has become VooDoo Doughnut.

Located right beside NBC Sports Grill & Brew, VooDoo Doughnut provides its patrons with some of the most unique dessert options imaginable, and the menu is everchanging with the season.

It doesn’t take long as you’re walking around CityWalk to spot one of those pink boxes that contain desserts from the popular shop, and now, it has become more convenient than ever to place and pick up an order from Voodoo Doughnut.

For quite some time, Guests have been able to place their order VooDoo Doughnut order on the Universal Orlando app and pick it up from the shop.

Just recently, though, VooDoo Doughnut added a parcel dedicated to mobile pick up to make things even more convenient.

This is new to us at Universal Orlando CityWalk!

This is new to us at Universal Orlando CityWalk! pic.twitter.com/qI8JX4dhQ8

Located across from the shop, Guests can now place their order through the Universal Orlando app, and instead of waiting in line or crowding around the shop in front of a makeshift table, which was the case before, they can now head over to the mobile pick up area and conveniently claim their order once it’s ready.

The iconic pink boxes were already easy to spot before. Now, with increased convenience, we can imagine that even more visitors of Universal Orlando will want to place an order to see what the talk is all about.

What’s your favorite treat from Voodoo Doughnut? Let us know in the comments.