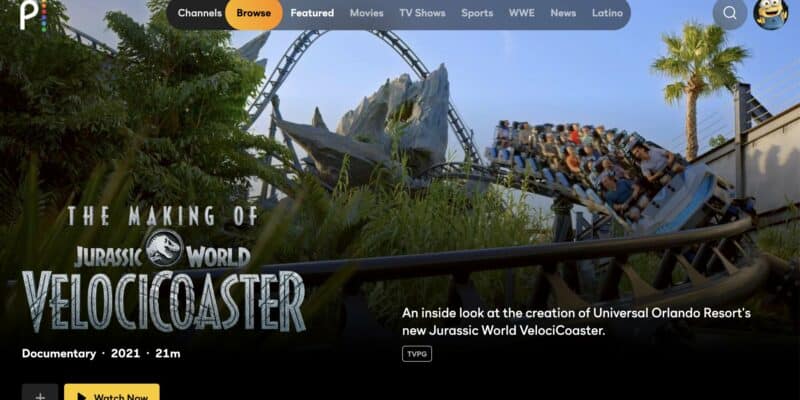 Universal Orlando Resort super fans will have an opportunity to take an exclusive behind-the-scenes look at the making of one of the most popular attractions at the Resort.

Since its opening earlier this year, Jurassic World VelociCoaster has taken the world by storm. The attraction is the fastest and tallest launch coaster in Florida. Though Guests only have a lap bar, they are treated to a thrill ride in which they are inverted upside on multiple occasions with no slowing down points until the ride comes to a close.

The Making of Jurassic World’s VelociCoaster a 21-minute documentary, is now streaming on Peacock. The documentary takes an inside look at the design, creation, and construction of the state-of-the-art coaster.

At the very start of the ride, you’ll launch 70mph in just 2.4 seconds through the Raptor paddock, barely missing the Raptors and being way too close for comfort!

Then, you’ll launch to 50mph in 3 seconds before experiencing one of the most unique elements of the ride, a 155ft tall “Top Hat” which gives you the illusion of flying over Islands of Adventure for a moment before dropping 140 feet down at 80 degrees. The track also crosses over and under itself 40 times. To me, the disorientation of the track makes it hard for you to even realize where you’re going and next thing you know, you’re already in another awesome maneuver!

The entire ride is absolutely incredible, but my favorite maneuver is the barrel roll over the Islands of Adventure lagoon toward the very end. The cool part about this epic finale is that the airtime you’ll experience is JUST as intense as that “Top Hat” I mentioned, except this time YOU’RE UPSIDE-DOWN!

In addition to the thrill of the ride, Guests are treated to an immersive line queue that goes the extra mile in terms of detail and story.

The queue and story leading into the ride incorporates Mr. DNA, views of the raptors, as well as appearances from Dr. Henry Wu (B. D. Wong), Owen Grady (Chris Pratt), and Claire Dearing (Bryce Dallas Howard).

“Very proud that our POPCORN team has another show on @peacockTV. Get a behind-the-scenes look at #Velocicoaster. Featuring @G_Prodigy, @shelby_neat, as well as Colin Trevorrow and others. Enjoy!”

Very proud that our POPCORN team has another show on @peacockTV. Get a behind-the-scenes look at #Velocicoaster. Featuring @G_Prodigy @shelby_neat, as well as Colin Trevorrow and others. Enjoy! pic.twitter.com/TJs3KWVTKl

Will you be checking out the new VelociCoaster documentary?