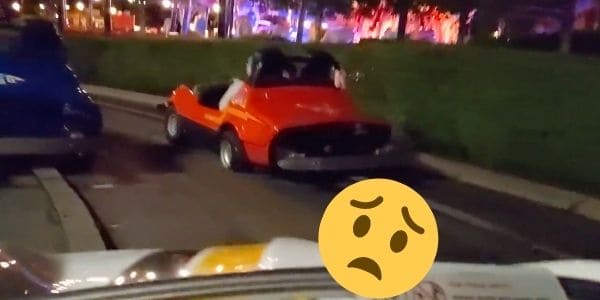 Though Walt Disney World offers many rides and attractions to Guests at EPCOT, Hollywood Studios, or Animal Kingdom, hardly any compare the legacy and reputation of the Tomorrowland Speedway in the Magic Kingdom. Found in Tomorrowland, of course, The Tomorrowland Speedway allows Guests of all ages to live out their dream of driving a “fast” car on an “intense” track at the Disney Park.

To get the obvious out of the way, the attraction is incredibly dated by today’s standards, but it still has some of that special Disney charm. Well, recently, that charm ran out, along with the air in one of the car’s tires.

Related: Fans Want Tomorrowland Speedway to Get “Much Needed” Update

Recently, on social media, a video was posted showing a Guest riding the Tomorrowland Speedway after the car blew a tire, forcing the Guest to carry on with only three wheels. See the full video on the Reddit post below:

enjoy the view of a flat tire on Tomorrowland Speedway

As seen in the video, the back left wheel of a car got a flat tire while the Guest continued to drive on the Disney World Speedway in Tomorrowland. The Guest who posted the video said that this happened last week and everyone found it hilarious. They explained that once they got parked, four different Cast Members had to lift it off the tracks for maintenance. But hey, at least they had a great view of Cinderella Castle and Space Mountain though!

More on the Tomorrowland Speedway at Magic Kingdom: