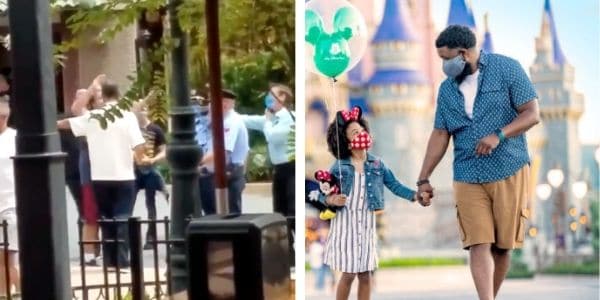 Make sure to remember your Disney World masks.

Due to the ongoing COVID-19 Pandemic, The Walt Disney World Resort, as well as The Disneyland Resort, have both had to make drastic changes in order to keep Guests safe. Both Walt Disney World closed and Disneyland closed, with the latter closed for nearly an entire year. Now, Guests are encouraged to follow the rules put in place by Disney in accordance with CDC recommendations regarding COVID-19, meaning Guests will most likely be wearing a mask while inside the parks for the foreseeable future.

One Guest, however, was captured toward the beginning of the pandemic for not complying and ended up being escorted out.

Some Guests don’t abide by the rules however, and action is required by Disney World security. In a Tweet from Michael Sheehy (@MichaelSheehyJr), a Guest can be seen being escorted by Disney World Security and Cast members at Disney’s Hollywood Studios Park. Strong language is used in the video, viewer discretion is advised.

See the full video below:

I mean, if the rules say you need to wear a mask. Just wear the darn mask. This dummy going all Karen at Disney Hollywood Studios.

I mean, if the rules say you need to wear a mask. Just wear the darn mask. This dummy going all Karen at Disney Hollywood Studios. pic.twitter.com/zkKFw5TiAz

It is unknown what happened to the Guest after they were forced to exit the park, but Disney does not mess around when it comes to following its rules and regulations. As of now, Guests are expected to wear masks or approved face coverings while indoors. Find the official list here. If you feel you cannot comply to any of Disney’s rules and regulations, it would be best to not visit that Park’s until you feel you can.

What do you think of this video? Have you ever seen someone be escorted out of a Disney Park for not wearing a mask?