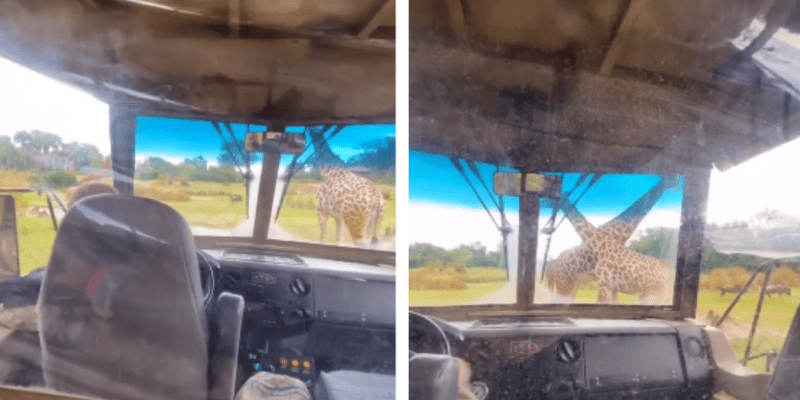 Anything can happen when you visit Kilimanjaro Safaris in Walt Disney World Resort at Disney’s Animal Kingdom.

Kilimanjaro Safaris takes Disney World Guests on a wild journey through the African savanna and every single guided tour is different.

Disney TikToker @minnieearsmagic posted a video on Kilimanjaro Safaris where the giraffes were a little less than cooperative.

As seen in the video above– which was shared a day ago and has more than 500 likes– the giraffes decided to roam and stay put right in front of the vehicle on the trail. As a result, the driver had to come to a complete stop for more than two minutes until the giraffes elected to move on and clear the path.

While two minutes may not sound like a lot on the outside looking-in, when you’ve got several vehicles continuously giving the guided tours, a two minute pause if not maneuvered correctly can mean back up of several more vehicles on the trek.

The good news is that Disney drivers are in constant communication and are able to maneuver and change direction to keep the tour on schedule and prevent traffic jam as much as possible.

Previously off limits to visitors after sundown, this unforgettable journey through the reserve allows you to witness rarely seen nocturnal animal behaviors. Strategically placed lighting evokes both the setting sun and rising moon, so you won’t miss a moment. And as always, your friendly safari guide is on hand to share expert knowledge.

Kilimanjaro Safaris is currently one of the nine attractions in Disney’s Animal Kingdom that can be accessed through Disney’s Genie+ Lightning Lane service.

Sometimes the wildest things to happen on Kilimanjaro Safaris have nothing to do with the animals themselves. Just recently, a Walt Disney World Resort Guest was seen jumping out of the vehicle to retrieve their cell phone during the ride.

Have you used the Lightning Lane on Kilimanjaro Safaris in Disney’s Animal Kingdom? Let us know in the comments.